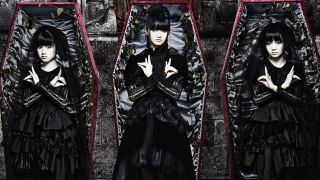 Both bands played at Japan’s Summer Sonic festival in Osaka in 2013 – and Metallica drummer Lars Ulrich watched their set on the small Flower Stage.

Later, Su-metal, Yuimetal and Moametal watched Metallica headline the event – and it was a moment which made a lasting impression.

Su-metal exclusively tells the new edition of Metal Hammer: “I was so surprised! I was like, ‘What in the world is this?’ I found it interesting that instead of hearing their music through my ears, I felt everything with my heart.

“Until then, I thought metal was something so alien and scary, but that concert made me enjoy metal and want to know more about the genre.”

Babymetal supported Metallica at Seoul’s Gocheok Sky Dome in South Korea last month. And for Su-metal, it was an experience that left her feeling spaced-out.

She continues: “I was going onstage still feeling spacey. As it was our first show here, we and the audience were kind of awkward figuring out how to pump up the show.

“But I was glad when I saw people jumping with the song Karate all the way to the back! I wanted to do what we usually do – be ourselves and show our style to the audience.”

The full interview with Babymetal can be found in the new edition of Metal Hammer which is out now. Ozzy Osbourne and Avenged Sevenfold frontman M Shadows are the cover stars, while artists including Metallica, Trivium, Slipknot and Stone Sour’s Corey Taylor, Judas Priest and Steel Panther also feature.

Ozzy: Iommi is the king of demonic riffs