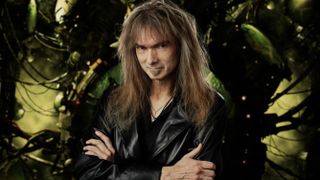 The song is taken from the Arjen Lucassen project’s most recent album The Source, which launched in April via Mascot Label Group/Musical Theories Recordings.

The Source is set six billion years in the past and is said to begin “on Planet Alpha – a world in the Andromeda system where computer intelligence has far surpassed that of humanity. Alpha is facing a massive global crisis, with ecological and political catastrophes threatening all human life.

“The Alphans, our human ancestors, try to save their planet by entrusting the global computer mainframe – The Frame – to find a solution.

“Given total control of the planet, The Frame reaches the logical conclusion that its creators are the cause of all the trouble. The only way to solve Alpha’s problems is to exterminate humanity.”

What happened when we went to the Science Museum with Ayreon