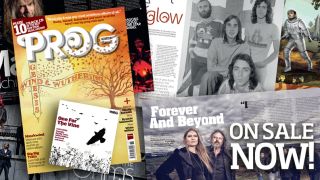 The brand new issue of Prog is on sale today, with Genesis on the front cover. With Steve Hackett touring in celebration of Wind & Wuthering’s 40th Anniversary, we talk to Hackett, Tony Banks, Mike Rutherford and producer David Hentschel about the making of the much-loved album and the reaction to it, asking ‘was it the band’s last big prog rock blow out?’.

Steve Hackett - as well as featuring in the cover story, Hackett talks to us about his new solo album, his career and his healing hands in this issue’s The Prog Interview.

Mike + The Mechanics - yet more Genesis-related treats, Mike Rutherford brings us up to speed with the new Mechanics album.

Hawkwind - Captain Brock steers his veteran space rockers into the dark woods with their latest album.

White Willow - The eclectic Norwegians are back with their first album for six years.

Physics House Band - we say hello to the mind-bending sounds of these young Brit proggers.

Uneven Structure - French prog metallers dial up the prog and turn down the metal.

Mostly Autumn - from the dark concept of Dressed In Voices to a new album brimming with the vitality of life itself.

Ayreon - Arjan Lucassen is back with more special guests and concepts than you can imagine!!

Post-Rock - Wire, sleepmakeswaves, I Like Trains and more explore how post-rock became part of prog…

Mike Portnoy - prog’s favourite drummer reveal;s what goes on in his proggy world.

Will Smith - the Thick Of It All comedian opens up his proggy record collection.

And Voyager, Big Big Train, Goldray and White Willow and more on the accompanying CD. [PLEASE NOTE: Damanek are track 6 on the CD and Ayreon track 7. There is an error on the CD pages in the magazine but the tracklisting on the back of the CD sleeve is correct]

You can get your copy of the new issue or subscribe to Prog here.