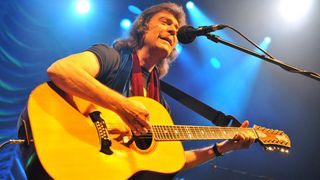 The 2CD, 2DVD and Blu-ray was recorded in the English city during the guitarist’s Acolyte To Wolflight With Genesis Revisited Tour last year. It’ll be released on June 24.

Hackett says: “When Inside Out told me that I could film a gig on the British leg of the 2015 tour for release, I thought that we should do it away from London and I felt doing it in Liverpool had a certain ring to it.

“This is an extraordinary city and the Philharmonic Hall is an extraordinary venue. And as a huge Beatles fan, I also know the landmarks there, such as Penny Lane and Strawberry Fields – I have been on the Magical Mystery Tour. So, the city means a lot to me from that point of view as well. The Beatles set the benchmark for all of us who have followed. We take our imagination from them.”

Hackett says choosing what to include in the set was a tough choice but reports he managed to find a “good balance between old and new” and adds: “What I have always borne in mind when choosing the songs is what they mean to the fans.

“Time has a way of turning them into an emotional calendar for people. These songs take on an importance and become part of their lives. So, when I do them live, authenticity is important. I am aware that what I have to do is find a connection between nostalgia and what things can sound like in a contemporary setting.”

In addition to the full set performed on the night, those who buy the live package will also gain access to behind-the-scenes footage, along with rehearsal documentary Somewhere South Of The River and promos for Corycian Fire, Wolflight and Love Song To A Vampire.

Hackett recently wrapped up a North American tour and will head to Japan next month for a pair of shows. He’ll then return to the UK for an appearance at the TeamRock-sponsored Stone Free Festival at London’s O2 on June 19.