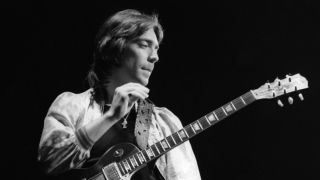 For Steve Hackett, an interest in music didn’t start with the guitar.

“There was always music in my life,” he recalls. “From the age of two I wanted to play like my father. He could play harmonica, bugle and clarinet, as well as little guitar. But he was an amateur. Later in life, he became an artist, but for a long while he was an editorial stenographer.”

Inevitably, Hackett’s earliest musical memories come from the radio and records played in his house.

“As I said, I was always around music. But I picked up on songs through the radio and the wind-up gramophone. It didn’t matter to me whether it was a song from the 1920s, or a Glenn Miller tune. It all sounded good to me as a kid! When I was 12, that’s when I was big enough to play a few notes on my dad’s guitar. Up until then, my musical excursions had been confined to the mouth organ.”

It was the Shadows who made a real impact on the young Hackett, and drove him forward.

“The Shads were the band to listen to for any aspiring English guitarist at the time. My memories of them are through their big singles, with Apache being the obvious one. That’s their most iconic tune. But when it comes to albums… well, I wouldn’t pick up any of theirs for this list. I suppose you always heard compilations from them. But as I have gone for albums and not singles, I have had to by pass them on this list. But these are 10 records which had a big impact on me, and still have.”

Steve Hackett plays the Stone Free Festival in London on June 19. Tickets are on sale now. Steve’s new live DVD, The Total Experience Live In Liverpool, is released on June 24 via InsideOut.

Below, Steve selects the 10 Records That Changed His Life.

“I love the guitar tone Eric got on this album. The sustain, the vibrato, the use of the Les Paul, the Marshall Amps… it’s all here. It took me years to get a finger vibrato sound that was a patch on what you hear on this album. In the end, I discovered the secret was to do it slowly, then build up from there to playing fast.

“For me, John Mayall himself is very underrated. People always go on about the guitarists he worked with. Not just Clapton, but Peter Green, Mick Taylor and so on. And yes, this was a constant legion of terrific guitarists,. But there was always a certainty in the way he performed and recorded. You listen to this album, and it has the essence of the blues in the honest, soulful, angry playing.”

“Again, this was from 1966. What a great year for UK music. It was on this album that you could hear production values creeping in. The song arrangements were becoming lot more daring and sophisticated. There was an evolution going in, through the way The Beatles and George Martin were working.

“All you have to do is mention Eleanor Rigby. Has there ever been a more perfect use of string arrangements? And there’s just so much pathos in the lyricism. And this from four young men, who were straddling the world at the time like colossi. Then you listen to For No One, which has backwards tapes and a lot of heavily psychedelic moments.

“There was so much invention on this album, including the way the band used loops. It would years – maybe even decades – before rock music caught up with what The Bearles were doing here.”

“And a year after Revolver, The Beatles took everything to a new level with this album. If ever music painted pictures, then this is the best example. It is such a visual record. All the songs are vignettes. Lyrically, it is a camera osbscura walking into people’s lives at particular flashpoints.

“I used to work at Battersea Park Fun Fair and Being For The Benefit of Mr Kite perfectly captured in the lyrics what it was like to work there when I was in my adolescence.

“This is not an album with stand out tracks. It all flows brilliantly. What matters is the whole, which is greater than the sum of the parts. That makes it a superb album, in the best sense of the term. And it is also so eclectic. I would say it is perhaps the most eclectic album made in the 60s.”

“When I talk to people about progressive music, Procol Harum somehow always get overlooked. People obviously know A Whiter Shade of Pale, because that gets playe don the radio almost every day. But that’s it. However, the band deserve so much more attention and respect for what they did.

“Listen to the title track. The use of the orchestra is so important, and the lyrics tell a fascinating story of putting yourself into someone else’s shoes. And Wreck Of The Hesperus also has a superb orchestration. I also love the album cover; it’s a clever alteration of a cigarette packet, and catches the attention straight away.

“Part blues, part orchestral, this album is a strange hybrid. But it was a blueprint for what we did in the early days of Genesis.”

“I bought this when I was 12. But then I sold it to a mate for 2⁄6 (which is 12p these days), because I wanted to use the money to get a guitar. He still has it, and is always promising to give it back to me. But so far, he hasn’t!

“I used to put this record on, and imagine myself conducing the orchestra. At the time, in fact, I was doing gymnastics, so would jump around the room while conducting. Forget about playing air guitar, nothing beats air conducting!

“What I love about this piece is that it goes from a whisper to a roar, and that’s why I feel it would certainly appeal to rock fans. The music is a crossover between classical, Spanish and romantic, and there’s a marvellous key change at the end.

“I also recall there was a 1930s film [Bolero, released in 1934] which had George Raft dancing thrillingly to this piece. That made an impression on me, because it brought to mind the fantasy of dancing with nubile young ladies – which of course became a reality for me later in life.”

“I had this when I was in my late teens and I had never heard anything like it before. The musicianship here is brilliant. Segovia was no slouch, and it has remained very contemporary. When I did my album Tribute (2008), I played some Bach on it, and tried to emulate what Segovia had done. I suppose my style of playing is somewhere between Segovia and Hendrix.

“Besides the quality of the musicianship here, it’s Bach, and how can you ever go wrong by listening to him?”

“Every instrument here sounds curious, but is still very recognisable. There;’s an incredible array of keyboard players involved – almost everyone you can think of at the time from the world of jazz. No other atonal album in the world has ever sounded quite like this. And it works quite superbly.

“I wouldn’t suggest that would thrill your grandmother, but Live-Evil, but this was quite a groundbreaking release at the time, in the way that Miles Davis allowed his music to sound so free and outside of the rules. It made a big impression not just on me, but a lot of others from my generation.”

Buffy Saint-Marie - It’s My Way (1964)
“The closest we have ever come to a female Bob Dylan. Well, that’s what I think anyway. Not only did she have a beautiful voice, but she was never afraid to stand up for civil liberties in her lyrics. She had a way of bringing to light the problems in our society that made more than the usual protest songs. The way she stood up for the plight of the Native Americans was incredible. Such a talented artist, who often gets overlooked.”

“I remember seeing them live at The Marquee around the time this came out, and they were incredible. The way the band took on so many influences here and melded them together to create a unique vision was extraordinary. You can hear jazz, John Coltrane, The Beatles, all fused together in an epic manner.

“Their use of the Mellotron here was brilliant, and there was such an extraordinary precision to everything they did. I have worked a lot since that time with Ian McDonald from King Crimson, who is a fine musician and I have to agree with the way he summed up the impact of this album, and of the band in general: they bridged the gap between the music of the 60s and the music of the next decade. This album wad the bridge.”

“Well, I was always going to include one Hendrix album. And this was a quite superb album. What can you say about the man that’s not been said so often before. His performance at Woodstock should be required viewing for everyone. And for him to take a Bob Dylan song like All Along The Watchtower and make it his own to the extent that even Dylan himself acknowledged it as a Hendrix song, well… that says everything. I know All Along The Watchtower isn’t on this album. But there’s some remarkable songs and playing here.”