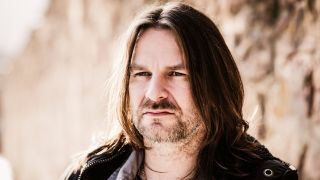 Ray Wilson has singled out Mike Rutherford as the reason he never recorded another album with Genesis.

The singer succeeded Phil Collins and fronted the band from 1996 until 1998. He recorded vocals on their last album, 1998’s Calling All Stations, before parting ways with them after the tour later that year.

Wilson tells Eonmusic: “When I signed my contract to join the band, it was for two albums. It was always the idea to do the first and then go from there, but Mike Rutherford changed his mind – that’s exactly what happened.

“I think he felt he didn’t have the stamina to do another one. All of a sudden you’re faced with going from 15 million albums sales to two and a half, and I think he couldn’t find it in himself to do the next one.

Wilson goes on to suggest that Genesis have tried to erase his era with the band from their history.

He says: “They kind of try to brush it under the carpet a little bit. Even though I believe Calling All Stations was the fourth best-selling album of their history, they seem to kind of try and get rid of it.”

The vocalist also recalls when the band ignored his request for a remastered copy of the album from their 2015 Genesis: 1983 – 1998 box set.

Wilson adds: “It really is kindergarten stuff. They’re Genesis, for Christ’s sake - you don’t behave like that. I don’t understand the politics behind it.”

Wilson has a number of live dates planned throughout the rest of 2016 in support of latest album Song For A Friend, which was released earlier this month.

How Genesis Fought and Won The Punk Wars