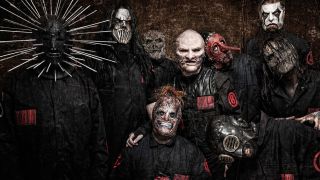 Corey Taylor has confirmed he’s back in the studio, as Slipknot continue to put the pieces in place for their new album.

The Iowa heavyweights took the metal world by surprise in October last year by releasing their new single All Out Life – with the follow-up to 2014’s .5 The Gray Chapter expected to arrive in the coming months.

Taylor posted a picture of himself in the studio on Instagram with the caption: “Guess what we’re doin’?”

The band’s Shawn ‘Clown’ Crahan previously told Billboard that the as-yet-untitled record “breaks down to good v evil, or in this sense, evil v good.”

He added: “It's about being a human being and experiencing what you have in correlating it to this world. This world is ugly and it's supposed to be, and it has to be in order for art to lead to grandness and beauty.”