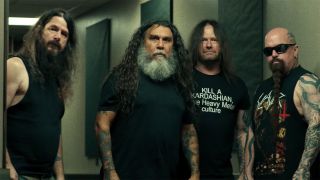 The Repentless Killogy will be released on Blu-ray and digital formats on November 8 in conjunction with Nuclear Blast Records and Prime Zero Productions, while the soundtrack from the show will also be available the same day on 2CD, 2LP and streaming platforms.

In July, Slayer released a trailer for the last leg of their farewell tour which featured Pimentel and Trejo.

The Repentless Killogy was written and directed by BJ McDonnell, who was behind the Slayer videos for You Against You, Repentless and Pride In Prejudice from Slayer’s final studio album Repentless.

McDonnell says: ”When we set out to do these initial three videos, we had the intention of continuing the next adventures of Slayer and Wyatt on a following album.

“But, Slayer announced that Repentless was the final album and tour, so this story, the videos, and finally a full live concert at the end is a perfect wrap up of the final tour. This is the finale of Slayer. This is the end of the monsters.”

To mark the announcement, Slayer have released a gory and NSFW trailer for the film, which can be found below along with the cover art and full tracklist.

Slayer’s next live performance will take place at Chicago’s Riot Fest this weekend. They’ll then head to South America before returning to the US for their final run of shows.