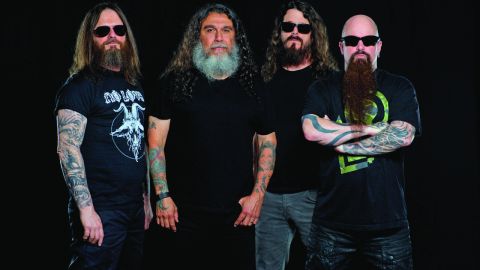 Let’s just cut to the chase: everyone knows what Slayer do, and what they have done so brilliantly for damn near 35 years, relentless and, indeed, repentless. The big question is, can they still do it?

Two years on from the tragically premature death of guitarist and founder member Jeff Hanneman – who contributed vastly to every album since the band’s inception and wrote many of the classics – can Slayer still be, well, Slayer? In short, the answer is: fuck yes!

This may not come as much of a surprise but it does, however, come as a huge relief. We’re used to percussive giants Dave Lombardo and Paul Bostaph playing musical drum stools, but with the loss of such an integral player as Hanneman, up there with the absolute giants of this game, this, the band’s first album without him, could so easily have been a difficult record, perhaps Slayer-by-numbers, or somehow lacking the dark magic that makes them so special. Make no mistake, it’s not. Repentless is prime fucking Slayer, arguably their finest album since… if not ever, then it’s certainly among the best. Really, it’s that good.

Slayer drift towards contentious lyrics like a truck drifts into oncoming traffic, and over the course of their career the band have offended pretty much everyone. Repentless is no different. As ever, the subject matters cover a bloody minefield of unpleasantness, but as evidenced on Jihad from 2006’s Christ Illusion, written from the point of view of a terrorist, not all lyrics are what they seem. That said, Pride In Prejudice with its ‘Don’t give me your power bullshit’ refrain appears pretty straightforward, and on songs like Implode and Vices (‘A little violence is the ultimate drug… Let’s get high!’) they merely reflect a world, and, in particular, a country, where atrocities are commonplace.

Then again, one doesn’t tend to look to Slayer for socio-political commentary. What we look to Slayer for is riffs so heavy they make your nose bleed, and Repentless has them in spades. The blisteringly fast-paced title track will get you a speeding ticket if you so much as look at a car while you’re listening to it, and tracks like Atrocity Vendor, You Against You and the Hanneman-written Piano Wire will make you want to take up kickboxing or skydiving just to compete with their rush. Each riff is unmistakably Slayer, with Exodus guitarist Gary Holt fitting the band like a leaded glove, but it’s Kerry King who has really raised the bar here, the opening instrumental Delusions Of Saviour stating the case as much as anything. Even without the war-cry of Tom Araya, it could be no one else but Slayer. If there is a complaint, it’s that When The Stillness Comes (‘Covered in blood, blood from above’) is too obvious a cue for a messy stage, but that’s pretty much it, and that’s nitpicking. Again: yes, Repentless really is that good.

HOW WAS WORKING WITH PRODUCER TERRY DATE?

“I only really knew him from the Pantera records, but then I was given this laundry list of stuff and he’s done a lot of great records. He’s all about letting you do what you do and then telling you if it sucks or not. He’s a sweet guy.”

“It was actually one of the first songs we recorded for World Painted Blood. I don’t know why it wasn’t on that record! But it’s very reassuring to have Jeff’s song on there. It’s a good way to say farewell.”

KERRY KING WROTE THE REST OF THE MUSIC ON REPENTLESS. HOW DO YOU RATE HIS EFFORTS?

“Kerry has a certain style of writing: you can hear that his half of Slayer was total speed. It’s all fast and high energy, the occasional slow-down but always back to fast riffs! It’s definitely fuckin’ Slayer, man.”