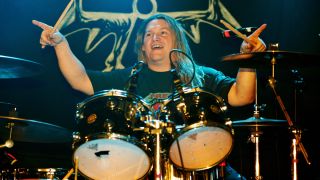 Reed Mullin rejoined Corrosion Of Conformity for their gig in Winnipeg – just days after suffering an alcohol-related seizure.

The COC drummer left the tour after collapsing ahead of Sunday night’s show in Edmonton, Canada. His role was filled by Jean Paul Gaster and Chris Adler of tourmates Clutch and Lamb Of God.

A statement issued by COC bassist Mike Dean seemed to suggest Mullin would be out of action for some time as he sought help for long-standing substance abuse issues.

But he turned up unannounced in Winnipeg, Canada, on Tuesday night and performed with the band. COC say: “Twist of plot – Reed showed up today in Winnipeg and played well, against advice. We’re glad he’s still with us. One day at a time and hopefully some big changes.”

The band later thanked Gaster and Adler for their help, saying: “Thanks very much to Jean Paul Gaster and Chris Adler for filling in on the drums for Reed in Edmonton and Calgary. It was an honour and a huge help.”

The tour continues tonight (June 9) in Milwaukee and wraps up tomorrow in Fort Wayne, Indiana.

Corrosion Of Conformity, Unearth and more for Bloodstock 2016