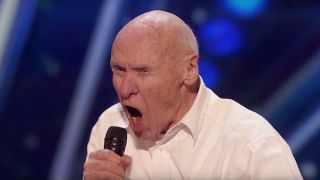 John Hetlinger is an 82-year-old retired gentleman living in America; he’s just your normal guy who enjoys a bit of karaoke now and again to get him out of the house. In fact, he enjoys singing so much he entered himself onto America’s Got Talent to showcase his vocal ability. But what song would he sing? Frank Sinatra? Elvis Presley? Johnny Cash? Well… not quite.

John it turns out is an absolute hero and rips through Bodies by Drowning Pool, to the shock and confusion of audience and judges alike. We know it’s not something you’d expect to hear coming out of an octogenarian’s mouth, but the reaction was a bit over the top… just look at this berk!

Do you think it’s shocking or are you laughing behind your hands like Simon Cowell? Maybe you think John is an inspiration for OAPs everywhere and we’re going to see a sudden increase in retirees slamming down to early noughties nu-metal? Just imagine your nan sitting at the back of the bus singing Nookie at full volume. That’s a world we want to live in.