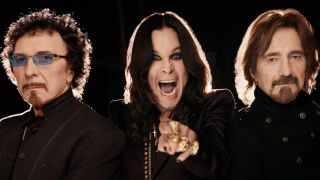 Black Sabbath could be set to announce a run of UK dates as their last-ever shows.

Fans have been sharing an image of a flyer found at the Download festival site, listing seven appearances during January and February next year.

They include gigs in Manchester on January 22, Glasgow on January 24, Leeds on January 26 and London on January 29 and 31, before two final dates in the band’s home city of Birmingham on February 2 and 4.

Black Sabbath launched The End world tour in January and the current official end date is September 21. That could change if they make an announcement before headlining Download on June 11 (Saturday). None of the venues currently have events advertised on their respective dates.

In March guitarist Tony Iommi said: “It would be nice to think it could finish back where it all started in Birmingham.

“When we’re at home we’ve always found it a bit nerve-racking – but Birmingham means such a lot to us.”

He added that the chances of a live package arising from The End tour were good, and that they’d been “doing a lot of filming” on the road.

Just as the tour began, Michael Miley, drummer with support band Rival Sons, said: “The dates go into 2017, but none of those are released.”

Black Sabbath fans are being asked to submit selfies taken at Download for an art project that concentrates on the origins of heavy metal. They’re the cover stars of the current edition of Classic Rock, on sale now in print, digital and via TeamRock+.