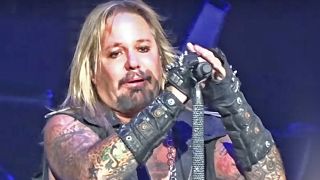 Motley Crue ended their 34-year career with a final show in Los Angeles last night – and frontman Vince Neil bade a tearful farewell to their fans and crew.

The concert ground to a temporary halt when drummer Tommy Lee’s roller coaster stopped working, leaving him hanging in the air until roadies came to his rescue.

Crue signed a legal document before their final tour began, making it all-but impossible for them to reunite after the Staples Center concert.

Neil said: “This is the last time you’ll see the four of us. Back in 1981 you got four teenagers roaming the streets of Hollywood, eating, drinking, smoking, fucking. And here we fucking are, 34 years later.”

He was overcome with emotion and had to pause while thanking the band’s backstage team, then continued: “Most of all I want to thank you fuckers for coming out. Let’s get to the fucking music.”

Lee’s bolted-down drumkit set off on its usual journey into the air above the stage on the Cruecifly roller coaster, before it came to a halt partway through. He said: “I can’t believe this is happening on the last night. I knew something wasn’t right when I took off.” He had to climb off the construction before the kit was returned to its stage position.

Bassist Nikki Sixx – who said before the show that he hoped he wouldn’t cry – told the crowd: “Maybe a year from now, somebody’s gonna say, ‘Remember that band Motley Crue? They were pretty cool.’

“And you’re gonna say, ‘Well, fuck you – because I was at their last concert ever!’”

Neil said afterwards: “It was a privilege and honour to play with these guys. Rock On! Happy New Fucking Year!”

The band have confirmed that the last show will be released on DVD later this year. The movie based on their book The Dirt is also expected in 2016.