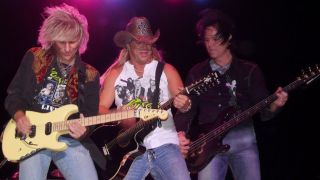 Poison frontman Bret Michaels received his love lumps late one night in Dallas, during the band’s tour in support of their debut album, 1987’s Look What The Cat Dragged In. But Michaels’ relationship woes led to Poison’s biggest hit of their career: Every Rose Has Its Thorn.

Following their gig in Dallas, Michaels and bandmates CC DeVille (guitar), Bobby Dall (bass) and Rikki Rockett (drums) retreated to a seedy motel for the evening. It was there that an exhausted and lonesome Michaels determined that a 3am call to the girlfriend – an exotic dancer, natch – with whom he shared an apartment in Hollywood would be just the thing to lift his spirits.

But things didn’t go quite as planned. “She answered the phone, but she sounded a little odd,” says Michaels. “Immediately she gave me that ‘I’m really sleepy’ line, which was not something she would normally say. And then I heard it – the whispering in the background. It was obviously a guy’s voice. Now, a female voice, that I could’ve lived with, you know what I’m saying? Hell, I may have even welcomed it! But another guy… It broke my heart.”

Devastated to learn that his girl was not the faithful sort, Michaels grabbed an acoustic guitar – and some dirty clothes – and headed to the motel’s laundry room. While his stage gear spun in the washing machine, the now lone ranger strummed some cowboy chords and emptied his broken heart into a song.

“I began singing: ‘We both lie silently still in the dead of the night’, just thinking about how cold and lonely it was going to be trying to work everything out with this girl,” says Michaels. “I was trying to capture being at that point in your relationship where it’s not officially over, but it’s over.”

Michaels titled the song Every Rose Has Its Thorn because “there I was, out on the road, getting to play music for a living, which was the rose. But then there was my exotic dancer back in LA, who I was positive would never cheat on me. Or so I thought. That was the thorn.”

Poetry. Poison recorded the song for their second album, 1988’s Open Up and Say… Ahh! But the band’s label, Capitol, initially balked at releasing it as a single.

“When we played Every Rose… for our label and management they told us it would end our career,” says Michaels. “They were like: ‘This song is not Poison. It starts with an acoustic guitar, and you’ve got this cowboy thing going on and it’s just sad’.”

After the album’s first two singles, Nothin’ But A Good Time and Fallen Angel, hit big (numbers six and 12, respectively in the States: both top 60 in the UK) Capitol wanted to release another up-tempo track, the band’s cover of Loggins & Messina’s Your Mama Don’t Dance, as the third single. But Michaels held firm to Every Rose Has Its Thorn.

“I knew it was a great song, and we had had some success with a ballad [I Won’t Forget You, from Look What the Cat Dragged In] once before,” he says. “And here’s one reason that I love my band: the rest of the guys stood up for me, and we got Every Rose… released. We made a great video and the song took off.”

Every Rose… became Poison’s first and only No.1 hit, reaching the US top spot on Christmas Eve, 1988; in the UK it was the first of three successive top 20 hits. “I had written the song just to get something off my chest, and at the time didn’t think it was a hit,” says Michaels.

Due to its massive success on radio and MTV, Every Rose… remains Poison’s best-known song. As for being recognised more for a sentimental, largely acoustic power ballad than for their characteristic hard rock tunes, Michaels has no complaints.

“I never get upset about being pigeon-holed,” he says. “And here’s why: I’ve always known that I have integrity and am honest in what I do. ”

In addition to its inclusion on numerous 80s rock compilations, Every Rose… has been referenced in movies and television shows including Bill And Ted’s Bogus Journey and episodes of The Simpsons. All well and good. But a few questions remain. For starters, what became of the unfaithful exotic dancer? “I’ve actually run into her a few times over the years,” says Michaels. “She’s come out to some Poison shows. She’s gone on to have children, and is in a good relationship.”

And the other man who was sleeping in Michaels’s bed that fateful night? “I did find out who it was,” he says. “And he was in a rival band! That’s the way girls do it – they just dig it in deep. But I’m not going to name names. Maybe one day.”