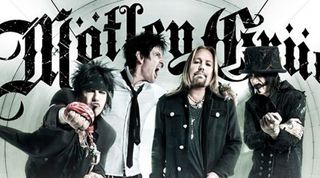 The Cessation of Touring Agreement, signed in front of hundreds of witnessed from the press last night, ensures the band can’t come back after the end of 2015.

And they’ve confirmed the movie version of their celebrated book The Dirt will appear after they’ve played their last show.

Crue have been plotting their own demise for some time, with bassist Nikki Sixx insisting they’d “blow their own brains out” when the time came to quit.

Drummer Tommy Lee says: “Everything must come to an end. We always had a vision of going out with a big fucking bang, and not playing county fairs, or clubs with one or two original band members. Our job here is done.”

But Sixx warns: “When it comes to putting together a new show we always push the envelope. Letting on to what we’re doing would be like finding out what you’re getting for Christmas before you open the presents. In an age of too much information we’d like to keep some surprises close to our chest.”

The band, who were formed in 1981, will set off on their Final Tour on July 2, with more than 72 shows in the US. That will be followed by gigs across the rest of the world next year.

Alice Cooper will open the shows, with Crue admitting: “Alice invented the genre and Crue put steroids in it.” Cooper adds: “Real hard rock bands are hard to find these days. Motley has always gone on stage with one attitude: blow the audience away. That’s exactly how we do it.”

The Dirt movie will be released next year, directed by Jackass mastermind Jeff Tremaine, who said last year: “The Dirt is something I pursued with everything I had. I’ve wanted to make this going back to 2002. I put everything I had into chasing it, and convincing everyone that I am the right guy for it. I really feel I am.”

Meanwhile, it’s been announced that country music artists are working on a Crue tribute album. It will feature Taylor Swift, Tim McGraw and many others; and executive Scott Borchetta says: “Our album will highlight just how great the Motley Crue song catalog is. At the end of the day, that’s what will stand the test of time.”