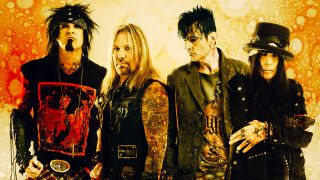 The Crue are back! (Image credit: Paul Brown)

Motley Crue have announced details for the soundtrack to the upcoming film The Dirt.

They released the first of four new tracks earlier today in the shape of The Dirt (Est. 1981) featuring a guest appearance from Machine Gun Kelly, who stars as drummer Tommy Lee in the movie.

The soundtrack will launch on March 22 – the same day The Dirt hits Netflix – and will feature a total of 18 tracks, including the new songs Ride With The Devil, Crash And Burn and the Crue’s cover of Madonna’s Like A Virgin.

Bassist Nikki Sixx says: “During the filming of our movie we got excited and inspired to write new music.

“Getting back in the studio with Bob Rock just fuelled the creative fires for us. To me, the music sounds like classic Motley. The lyrics were written for the movie and are a reflection of our life.”

To mark the announcement, the band have also shared a video for The Dirt (Est. 1981) which can be found below, along with the cover art and tracklist for the soundtrack.