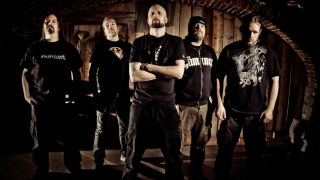 Meshuggah have released a lyric video for their track Born In Dissonance.

It’s lifted from their upcoming album The Violent Sleep Of Reason, which will be released on October 7.

Meshuggah drummer Tomas Haake tells Rolling Stone: “It ties in with the biblical apocalypse – the idea of a deity coming back to undo it all and taking to heaven the ones who are righteous. It’s about a monster that’s coming for us, or maybe an asteroid hurtling towards the earth.

“It’s always been a weird conundrum for me how some people, even devout people, fear the apocalypse while others welcome it. I’ve never understood that.”

Haake recently told Metal Hammer that The Violent Sleep Of Reason is the first they’ve recorded live in “20, 25 years.”

Describing the inspiration behind the record, he added: “The whole idea of why we chose the title is to connect with the lyrical content of the album, which is to a fair degree about current events and what you see going on such a terrorism and extremist views on ideals and religious dogma, and the violent implications that you get from being asleep or not acting or reacting to what’s going on in the proper way.”

Meshuggah commence their European tour this November – which also includes a UK and Ireland run next January.