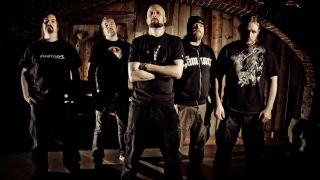 Meshuggah’s Tomas Haake say they recorded forthcoming album The Violent Sleep Of Reason live for the first time in “20, 25 years.”

The drummer, who claims they were “one of the first bands” in the djent scene to use computer software to create their music, says they’ve opted for more traditional recording sessions on their next release to capture their sound “honestly.”

He also admits that he feels their last two albums 2008’s Obzen and 2012’s Koloss were “too perfect.”

Haake tells Metal Hammer: “This album is recorded live. It’s the first time we’ve done that in 20, 25 years. It was time limitations that stopped us doing it before. And it’s been interesting.

“If you put it all together using computers then you often have to fix problems after the fact. I’ve gone back to records where I’ve not known every drum part. And once you do that you can start with drums and then just add layers of guitars and then bass and it all sounds perfect.

”Obzen and Koloss are great albums but, to me, they are a little too perfect. It didn’t really capture what we sounded like honestly.

Haake adds: “So for us it was just about going back to those albums that inspired us when we were growing up, that were important to us in our formative years, and all of those bands had that energy. The albums in the 80s and early 90s had the rawness that I’m talking about – that’s what we wanted to recapture.”

The Violent Sleep Of Reason will launch on October 7. It can be pre-ordered on Nuclear Blast.