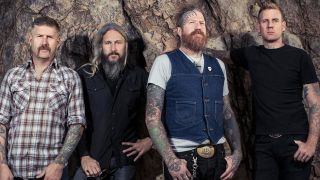 Mastodon say they’re about to release a brand new track in the coming days.

The band were speaking with Kerrang, when they revealed the song will appear on digital platforms ahead of their 2019 tour, which will get under way in Belfast on January 14.

Drummer and vocalist Brann Dailor says: “It’s as heavy as I’ve heard us in a while,” while guitarist Bill Kelliher reports it’s “a basher” and “brutal.”

It’s also reported that the as-yet-untiled track features a guest appearance form Scott Kelly of Neurosis, who will hook up with Mastodon on the road through February 9 in Brussels.

At the start of December, Dailor checked in from the studio where Mastodon have been working on the highly anticipated follow-up to 2017’s Emperor Of Sand. No release date has been set – but with a new single on the way, hopes are high that it'll be sooner rather than later.

Mastodon will be joined on the upcoming tour across the UK, Ireland and Europe by special guests Kvelertak and Mutoid Man.