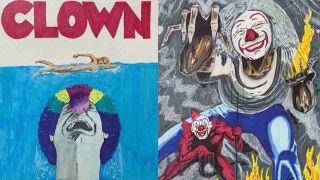 Mastodon’s Brann Dailor has revealed that he coped with lockdown by drawing 101 different pictures of clowns.

Speaking exclusively in the brand new issue of Metal Hammer, the drummer says that he embarked on his epic art project to cope with the “horribleness” of the COVID-19 pandemic.

“It’s this meditation that’s been important to my mental health throughout this experience.” he says. “Everyone is dealing with it in their own way, but for me it was imperative that I sit down and do this. I draw these two clowns hugging, like, ‘I needed that’, you know what I mean?”

The images Dailor drew include a clown version of Iron Maiden’s Number Of The Beast album cover, a clown-inspired Jaws poster and his dog, Thriller, depicted as a clown.

He says that he sent some of the pictures to friends and other musicians, including Lars Ulrich, Joey Jordison, Gojira’s Joe and Mario Duplantier, Deftones’ Chino Moreno and more.

In the same interview, Dailor revealed some details about the new Mastodon album, due in early 2020.

“It’s all over the map. There’s some big, big heavy riffs that are happening, so that’s what I’m into. And then there’s some guitar gymnastics by Brent Hinds that have been some of the most difficult things I’ve tried to wrap my ahead around and play drums to.

“So there’s some super-progginess coming from him, and some really super, pretty moments. But there’s some rockers in there, too.There’s some heavy, fast stuff as well. But a lot of it is kind of doomy. But that’s where we’re at!”

You can read the full interview with Brann Dailor – and see many more of his brilliant and slightly strange clown pictures – in the brand new issue of Metal Hammer, which also features exclusive new interviews with Machine Head’s Robb Flynn, Code Orange, Halestorm, Five Finger Death Punch and many more.