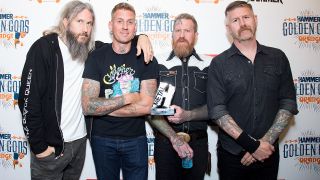 Mastodon’s Brann Dailor has spoken about the band’s highly anticipated new studio album in an exclusive interview in the brand new issue of Metal Hammer magazine.

The drummer and vocalist has been speaking to the mag about life in lockdown and his series of colourful clown drawings – and he also gives an insight into how the follow-up to 2017’s Emperor Of Sand is sounding.

Dailor reveals: “It’s all over the map. There’s some big, big heavy riffs that are happening, so that’s what I’m into. And then there’s some guitar gymnastics by Brent Hinds that have been some of the most difficult things I’ve tried to wrap my ahead around and play drums to.

“So there’s some super-progginess coming from him, and some really super, pretty moments. But there’s some rockers in there, too.There’s some heavy, fast stuff as well. But a lot of it is kind of doomy. But that’s where we’re at!”

The as-yet-untitled album is expected to be released in 2021 and is likely to include the track they recorded for Bill And Ted Face The Music which was revealed back in May.

Speaking previously with the RRBG podcast, guitarist Bill Kelliher said he had been “writing like a madman” for the new record, adding: “It's different than Emperor Of Sand, but there's definitely a vibe going on.

“It's definitely got more Neurosis heaviness, simplified guitar parts – and Brann, he always demos most of the vocal ideas because he always has melodies. He’s been singing on a lot of it, at least for the demo purposes.

“The vocals are kind of Asleep In The Deep style – kind of Radiohead-ish: real melodic with a lot of vocal harmonies.”

The full four-page interview with Dailor features in the new issue of Metal Hammer magazine, which is out today.

In issue 338, we find out how your favourite artists have been spending lockdown and ask them how they’re planning for the future. The magazine also features Machine Head, Code Orange, Lacuna Coil, Fever 333, Halestorm, The Hu, Testament, Five Finger Death Punchand much more.