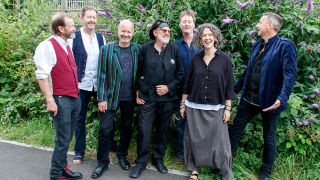 British prog rockers Kaprekar's Constant have announced they will release a new vinyl version of their recently released second album Depth Of Field. The new version will be released on Plane Groovy Records on February 14, and comes as a two-disc, 180g vinyl edition.

The new vinyl release will also feature two new tracks, Deception and The Fever Tree, written especially for the vinyl release. You can hear snippets of these tracks in a new teaser video from the band, which you can watch below.

"The running time and track lengths of the digital album really didn’t lend themselves well to the vinyl format so we returned to the studio to record additional material," explains bassist Nick Jefferson. "These weren’t outtakes or in any way considered too weak for the original CD. It was good to work to a strict deadline for a change and we feel the resulting tracks are really strong."

The new vinyl edition of Depth Of Field can be pre-ordered at Burning Shed and also Talking Elephant. And if you're in the market for a new record player, take a look at our guide to the best turntables.