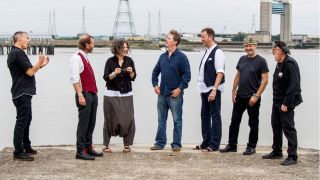 British prog rockers Kaprekar's Constant have announced details of their second album. The  band will release Depth Of Field through Talking Elephant Records on September 20.

"Apart from the addition of Caravan’s Mark Walker on drums and percussion, the line up remains the same," guitarist Al Nicholson tells Prog. "We’re delighted that David Jackson found time to weave his special magic on six of the seven tracks and, of course, to have Ian Anderson’s contribution is very special to us as massive Jethro Tull fans. Fans of the first album will find much to enjoy on Depth Of Field with the same blend of epic storytelling pieces and some shorter tracks.'