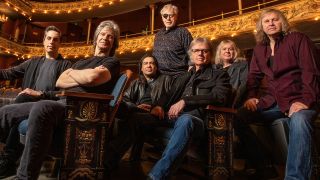 Kansas have released a video for their new single Jets Overhead.

The track follows Memories Down The Line and Throwing Mountains from the upcoming album The Absence Of Presence, which is set to arrive on June 26 through InsideOut Music.

The Absence Of Presence will be released on CD, 2LP, limited edition deluxe CD/Blu-ray and on digital and streaming platforms.

Kansas are still scheduled to tour across Europe later this year, with the first show set to take place in Frankfurt on October 12.

Kansas: The Absence of Presence
Kansas are preparing to release The Absence Of Presence – their first studio album since 2016's The Prelude Implicit. The record features the lead singles Throwing Mountains and Memories Down The Line.View Deal

Kansas: The Absence of Presence
1. The Absence Of Presence
2. Throwing Mountains
3. Jets Overhead
4. Propulsion 1
5. Memories Down The Line
6. Circus Of Illusion
7. Animals On The Roof
8. Never
9. The Song The River Sang