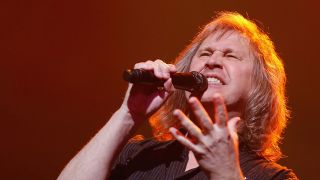 “The duty of making a Kansas concert set list could never be left in my hands,” says Kansas frontman Ronnie Platt. “There are too many Kansas songs I love, and therefore the show would be at least six hours long!”

Ronnie joined the band in 2014 after founder member and original frontman Steve Walsh retired, and was immediately faced with an audience whose main concern wasn’t the fact that Platt had spent most of his adult life driving a truck, but the fact that he wasn’t Walsh. Such is the lot of the replacement vocalist.

“I was just nervous to death how the fans were going to accept me,” Platt told the St. Cloud Times in 2016. “But boy, I’ve been really accepted well. So whatever I’m doing, I hope I keep doing it!”

Below, Ronnie selects his 10 favourite Kansas songs. “This is not a permanent list,” he says, “but an ever-changing one, and it’s not a sequential list in the order of most liked to least liked!”

Most likely the first Kansas song I ever heard. Being a singer from a very young age, this song with its a-cappella opening grabbed me, followed by the ever changing dynamics. It began my love not only for the band but for progressive music

Away From You (Monolith)

The first Kansas song I had sheet music for. The hard-driving feel at the beginning and its intense vocal had this song as one of my early favourites.

Miracles Out of Nowhere (Leftoverture)

The complexity of the song - with the melodic violin and fugue interlude - captured my musical imagination.

Another song from Leftoverture. The guitar lead coming in immediately and then concluding the intro with harmony guitars, heartfelt lyrics, and a passionate, dramatic conclusion, has always been near the top of my list

This song challenged me. I always loved the song but when it appeared on the very first set that I performed with Kansas, I became a “study” of the song. The piano parts were intense! It is the song that brought my piano playing to a new level.

Powerhouse from beginning to end, hard-driving guitar and David Ragsdale’s violin screaming the solo! A song to make you think.

A song I heard in my younger years and always loved, a song of hope and faith. The growing intensity of the vocal and the melodic guitar solo has just always has given pleasure to my ears. Since performing with the band, this song has become my unofficial signature song.

Stand Beside Me (In the Spirit of Things)

This song’s lyrics and soothing melody are compounded by a compressed and chorused fretless bass. It instantly drew me in and didn’t let go.

Back in 1982-83 my cover band performed this song as a part of our set list for quite some time. The “up” tempo, flow of endless notes and the harmony leading every line of the verse rocks!

Dramatic through and through, Steve Morse on guitar and, in my opinion, Steve Walsh at his finest.

I have to stop now! If I look over all the Kansas albums, I will be making endless changes to this list, and if I made this list a month from now it most likely would have changes in it.