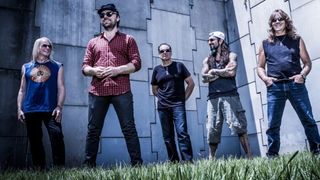 Flying Colors have released a video for The Loss Inside.

Speaking about the track, singer Casey McPherson explains: “We all go through loss, and the grieving process often comes in waves, I love how musically and lyrically this song represents that process for me.”

The first sessions for Third Degree took place at Steve Morse’s studio in Florida in December 2016, where seven songs were written. From there, the band members had to scatter back to their other personal and professional obligations, eventually reconvening two years later in December 2018.

Drummer Mike Portnoy says: “Our mission statement when we came together is still the same now. It’s the same five guys with extremely different musical personalities and backgrounds coming together into a giant melting pot where it all comes out on the other end with music that’s accessible, melodic, deep, and colourful. That’s always been the goal of this band, and so far, I think we’re three for three.”

The album is now available to pre-order.

7. You Are Not Alone

10. Waiting For The Sun (Bonus Track)

12. You Are Not Alone (Alternate Instrumental Version)