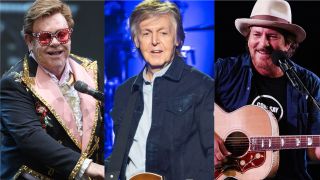 Lady Gaga will curate a TV event later this month which will raise money for the COVID-19 Response Fund – a special show that will include some of the most famous names in rock.

One World: Together At Home will be broadcast globally on April 18 through streaming platforms including YouTube, Twitter, Twitch and Facebook, while TV networks ABC, Bell Media, NBC, ViacomCBS Networks and iHeartMedia will also broadcast the event live in North America.

The BBC have secured rights for the UK market, with a highlights package featuring exclusive performances from some of the UK artists along with interviews with workers who are on the frontline in the battle against coronavirus set to air on April 19 on BBC One and iPlayer.

Controller of BBC pop Lorna Clarke says: “I’m thrilled that BBC One is to broadcast coverage of this very special event, featuring some of the world’s most loved musicians, to show support to care workers all over the world at this challenging time.”

Global Citizen and the World Health Organisation are behind the TV special, with Lady Gaga confirming that since the fund was set up last week, $35 million had already been raised.

She says: "It is so important to think globally and support the World Health Organisation to curb the pandemic and prevent future outbreaks. We want to highlight the gravity of this historical, unprecedented, and cultural movement.

“We are all so very grateful to all of the health care professionals across the country and around the world who are on the frontlines during COVID-19. What you are doing is putting yourselves in harm's way to help the world and we all salute you.”

For further information about the COVID-19 Response Fund, visit the official website.