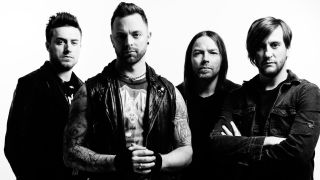 Bullet For My Valentine have revealed they’ll enter the studio at the end of August.

But rather than laying down a number of tracks for the follow-up to 2015’s Venom – they say they’re only planning to record one or two songs.

Bassist Jamie Mathias tells Arte Concert: “I think the plan is, at the end of this month, we’re going to have a couple of days in the studio writing and recording.”

Lead guitarist Michael Paget adds: “It’s to keep momentum of the band going, bring a bit more focus back and get ready for our winter tour and just see what comes out – so hopefully it will be happy days.

“We’re hoping for two, but if not it will just be one song.”

Bullet For My Valentine have a number of live dates scheduled over the coming months, including an appearance at Manchester’s Academy on December 4, where they’ll play their 2005 debut album The Poison in full.

It’ll mark the first time the Welsh outfit have played the record in its entirety. They’ll be supported by Killswitch Engage and Cane Hill.

Tickets for the band’s upcoming live dates are available to purchase via Bullet For My Valentine’s website.