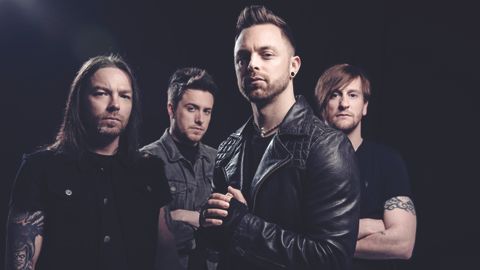 For a long time now, Bullet For My Valentine have been the whipping boys of the heavy metal community, ridiculed for being ‘false metal’ despite their overt heaviness and fondness for widdly guitar solos. However, as of late the band have been through something of a rebirth since the departure of bassist Jay James and the arrival of his replacement Jamie Mathias, and are now starting fresh.

Throwing off the shackles of the toilet that was Temper Temper, Bullet For My Valentine have rediscovered their love of heavy metal, and within Venom’s 11 tracks, there’s something that even the sternest denim-bothering elitist can latch onto. While on the surface they might not be pushing the envelope too far or breaking any boundaries, it’s hard to deny Bullet’s technical proficiency and beefcake frontman Matt Tuck’s talent for writing a stonker of a chorus. From the arms-wide-open singalong of Broken to the middle finger-waving Worthless to the menacing Pariah, you will find yourself humming or singing along long after this record has finished.

That said, Matt Tuck’s lyrics are at times weak – see You Want A Battle (Here’s A War) with ‘I will not take this anymore, these words will never be ignored, you want a battle, here’s a war’ – and the sentiments fail to connect a level further than ‘easy to chant along to’. But that could be the point. There are bands around the world selling out arenas playing heavy metal that isn’t particularly clever, but gets the blood pumping and circlepits spinning. This whole record is filled with galloping guitars, wailing solos and pounding drums to get your head banging like Corpsegrinder on speed, so you can’t fault its heavy credentials or the passion involved – which, perhaps ironically, can be summed up in those aforementioned lyrics.

The record’s overarching theme of bullying and oppression is obvious from the outset. There’s a sense of angst (that we as metalheads have no doubt all felt at some point in our lives) flowing through the album like a river of clenched fists and bitterness – but there’s also one of helplessness. This is a grown up, more mature record from four men who are now in their 30s looking back at the pain of their former selves. With every guitar stab, every snare hit and every scream, the past pours out of Bullet into their music in pure metallic fury. It’s music therapy for band and fan alike.

Despite those occasional lyrical pitfalls, glossing over this record is a detriment to what Bullet do and are capable of. Like it or not, they come out swinging and play venues most bands could only dream of thanks to their brand of heavy metal from the valleys of Wales – and that should be applauded. This is also, without a doubt, their best record since The Poison. For a band who released their debut a decade ago, their fire still burns bright.

WHAT WERE YOU WRITING ABOUT THIS TIME OUT? THERE’S A LOT OF ANGSTY STUFF ON THERE…

“I went back to ‘school time Matt’. Life for me, when I was between 14 and 16, was not fucking cool, man. I was having a hard time at school, getting my ass kicked by guys for being a super-skinny, pale dude with long hair into heavy metal. I became an easy target. It was about feeling those emotions and trying to recapture that frustration and fear and anxiety and work that into a song.”

WHY DID YOU WANT TO GO BACK TO THAT PLACE?

“Those times aren’t here, and to write an album like that, that’s what you need to feel. On the last one, there was no real passion and fire to what I was trying to say.”

DO YOU THINK YOUR FANS WILL IDENTIFY WITH THAT KIND Of STUFF AT THIS POINT?

“It depends on whether they’ve experienced it or not, really. I mean, most kids will have had it to an extent growing up, whether it’s minor or major, so I would like to think that they can relate to it somewhat. But I know that there are some kids who can definitely relate to it, and I know there are men and women like me who have had it before, or still have it at work, or whatever. The whole point of this album was to try and make it as real as I possibly could, to try and connect with someone out there. It’s hard to write 12 autobiographical tracks for every album! That’s just not gonna happen, I don’t care who you are.”