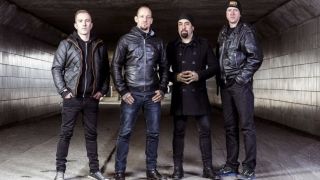 Volbeat bassist Kaspar Boye Larsen has revealed how he left his wife and one-day old son behind to take the job with the Danish rock outfit.

Larsen was brought in to replace Anders Kjolholm and was confirmed as a full-time member in May of this year. And while the opportunity was one he couldn’t turn down, it meant he had to miss out on some important family time.

Speaking at Heavy Montreal, Larsen says: “On 11 April we had a son and 12 hours later I was flying for the US tour. Having a small kid back home is kind of hard. But my wife is really into it as well, she is supporting me all the way.

“I miss them. This was the beginning of a real long tour, like six or seven weeks. And I haven’t been away from my wife for that much in 11 years.”

Larsen’s relationship with Volbeat mainman Michael Poulsen goes back two decades and he previously filled in for Kjolholm briefly when Volbeat were still an up-and-coming young act. He still performs with his punk act Parasite too.

He adds: “I played in local Danish bands. I’ve been known to Michael for like 20 years since the death metal days in Denmark. We hung out and have been in contact ever since.

“In 2006 on Volbeat’s first European tour, I was asked to do a session job because Anders couldn’t make it. Volbeat was not that big and we were opening for two other Danish bands, very small stages and venues, but that was great.

“Later on, when Anders was back, my band also opened for Volbeat on other tours.”

Larsen arrived too late to mark his mark on Volbeat’s current album Seal The Deal & Let’s Boogie, but he is looking forward to the next album when it comes.

He says: “Of course I have some ideas but the new record was recorded without me. My contribution will be on the next album.”

The full interview with Kaspar Boye Larsen will appear on an upcoming episode of One On One With Mitch Lafon. A shortened version can be heard below.

Volbeat tour the UK with Alter Bridge in November.