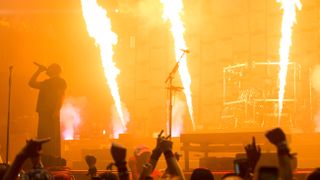 A Disturbed fan has been charged after biting an emergency worker at the band’s recent show in New Jersey.

Elizabeth Chirichiello, 36, has been charged with assault following the incident at the PNC Bank Arts Arena in Holmdel. A medic was trying to give her aid, Holmdel Patch reports, when she bit the uniformed EMT worker.

New Jersey State Police say Chirichiello was also charged with kicking state troopers as they were trying to subdue and arrest her, considered a fourth-degree crime in the state.

Disturbed are on the road in support of their sixth album Immortalized, which was released last year.

Frontman David Draiman recently recalled feeling “out of place” at his audition with the group 20 years ago. He said: “I went to an audition for a band whose ad I’d seen. I walked into their rehearsal spot on the south side – and the guys looked like they were from Skid Row.

“All wearing faded, frayed, acid-washed jeans, flannel shirts – halfway open, of course – long, feathered and flowing hair, and Converse All Stars no laces, with the tongues out.

“I could not have felt more out of place. I was wearing jean shorts, yes, jean shorts, sandals and a plain white t-shirt, in full ‘north side Chicago stoner’ mode.”

Why Disturbed's David Draiman is done telling people what to do