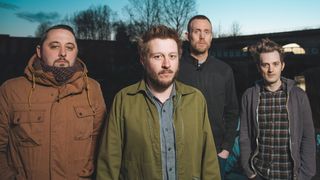 65daysofstatic say they’d like to work on another video game soundtrack after their experience with No Man’s Sky.

They issued the official soundtrack to the Hello Games title last week under the banner No Man’s Sky: Music For An Infinite Universe, and previously stated that the project had pushed them to “explore new processes and techniques.”

And the band’s Paul Wolinski says because of the positive vibes from creating the album, he’d like to get involved with other games in the future.

He tells the Metro: “We’d love to do both games and film again. We’re aware of how lucky we’ve been with this project, just in terms of the freedom we’ve had and how suited it is to the kind of music we make – but there’s something really interesting for me about the computer game world.

“As forward-thinking as this project has been, there’s already so much we’ve learnt I’d really like to apply to the next project, whatever that happens to be.

“So hopefully we’ll get another chance to work on another one of them, and push this emerging form forward a little bit more.”

No Man’s Sky, which allows players to explore a vast, procedurally-generated universe, was released on PlayStation 4 in North America and Europe earlier this week, with the PC version arriving tomorrow (August 12).

Despite this, Wolinski says he and the rest of the band have yet to experience the finished product. “Well, none of 65daysofstatic has actually any means to play it at the moment,” he adds. “We don’t have PlayStations or anything.

“Obviously it’s going to be impossible for us to check the whole thing because it’s going to go on forever. But in the few hours we played it, we only heard a fraction of all the stuff we put into it, but we guess that’s kind of the point.”

65daysofstatic will head out on tour in October.