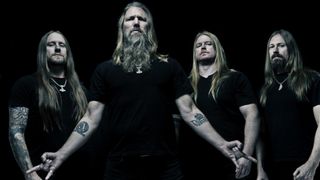 Amon Amarth have released a video for their track Raise Your Horns.

The promo features live footage from the band’s shows this year in San Diego, London, Paris, Tilburg, Berlin and at Hellfest in France. Fans, artists, actors and sports stars also feature in the clip, all raiding their horns to Amon Amarth.

King Diamond, Zakk Wylde and Dave Mustaine appear in the video, as do members of Slayer, Disturbed, Machine Head, Behemoth and other.

Raise Your Horns is taken from Amon Amarth’s most recent album Jomsviking, released earlier this year via Metal Blade Records.

Amon Amarth previously asked fans to submit footage of them raising their metal horns for the video. Some of those clips can be seen in the final product below.

On the concept behind the album, frontman Johan Hegg previously said: “The Jomsvikings were a shadowy and legendary sect of Viking mercenaries, as shrouded in myth now as they were when they fought across Europe and the Middle East.

“Ruthless and deadly warriors who fought for the highest bidder, their code was simple – show no fear, never retreat, defend your brothers, and when called upon, avenge their deaths.”

He added: “I felt we were finally ready to use their story as the jumping off point for an Amon Amarth album. The Jomsvikings and their world is the background for the story of a young man that is in love with a girl but unfortunately she’s being married off.”

Amon Amarth have a string of tour dates still to come this year.