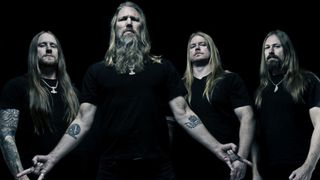 Everyone knows two things about Amon Amarth: firstly, that they’re a rather excellent heavy metal band, and secondly, that they are utterly obsessed with Vikings. Frankly, who can blame them? Vikings and metal go together like cheese and pickle, although the end result is considerably louder and more exciting. To prove our point, here are the Swedish marauders’ 10 greatest ever Viking anthems…

Not so much a deep cut as a giant axe scything through your neck, Legend Of A Banished Man is a gripping and brutal tale of a vengeful exile and his rather scary sounding Death Ship, all set to some of the most thunderous heavy metal ever committed to tape. ‘So run for your lives,’ roars Johan Hegg. ‘Death has arrived!’

Aside from having one of the most insanely metal titles of all time, this fiery tale of divine retribution against those pesky invading Christians is a bruising blur of evocative imagery and vicious riffs. ‘As if from nowhere, dark and grim he appears/The warlord of the Gods comes with force!’ Conclusion: don’t fuck with the Vikings.

A routine fixture in Amon Amarth’s live sets, Death In Fire is an unhinged roar of devotion to victory on the battlefield (or, indeed, in the circle pit). Johan Hegg has never sounded more monstrous and imposing than he does when bellowing: ‘Fight for honour, glory, death in fire!’

Triumph on the battlefield is supposedly the best way to get on the Valhalla guestlist, and this blistering opener from Amon Amarth’s breakthrough album With Oden On Our Side provides very helpful instruction on how to do it: ‘I raise my axe above my head/My eyes stare in furious rage/Yet more blood will be shed/This is a victorious day!’ Yikes.

Everyone knows that Vikings loved an occasional half of shandy. As a result, Amon Amarth were always destined to write a flat-out drinking song, and Raise Your Horns is it. The song’s conclusion, that ‘We will drink toniiiiiiiiiight!’ may be stating the obvious somewhat, but at least it confirms that Vikings and metalheads have at least one major thing in common.

Viking executions weren’t very nice. Imagine having your ribcage cracked open and your lungs pulled out to look like wings… floppy, wheezing, offal-soaked wings. Actually, don’t imagine that. Just listen to this face-flaying death metal rabble-rouser which is dedicated to just such an ignominious fate. Altogether now… ‘skinned alive, your ribs will crack!’ No? Just us then.

Songs about Thor are always brilliant, because Thor is the most metal of all Gods (and superheroes) and has a massive fucking hammer at his disposal. Fittingly, Amon Amarth’s most frequent show-closer is a flagrant tribute to the burly Norse deity: ‘Thor! Hlödyn’s son! Protector of mankind/Ride to meet your fate, Ragnarok awaits!’ It doesn’t get more metal (or more Viking) than that.

Okay, so you may allow yourself a small chortle when Johan Hegg sings ‘Our helmets shine in the sun…’, but in every other respect, Cry Of The Black Birds is one of Amon Amarth’s most powerful and dramatic battle anthems. And like Maiden before them, the Swedes know exactly how to sound like a marauding swarm of galloping horses. Attack! Attack! Attack!

If Amon Amarth have a greatest hit, this is the one. The Pursuit Of Vikings encapsulates everything that’s great about this band, with the added bonus of a chorus that even the most booze-ruined punter could sing along with: ‘Oden, guide our ships/Our axes, spears and swords/Guide us through the storms that whip/And in brutal war!’

A clear victor due in part to the fact that it actually sounds like a giant Viking warrior stomping on your head, Guardians Of Asgaard absolutely nails the obvious parallel between Amon Amarth’s never-say-die spirit and the fearless ferocity of their ancient Norse brethren. ‘Standing firm against the odds,’ barks Johan, ‘we are guarding Asgård’s mighty walls!’ Yes, you really are. Hail!