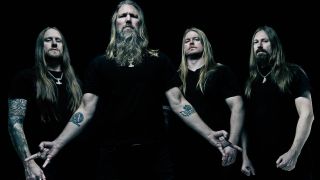 While the vocalist admits that the band’s chosen subject might seem “weird” to other people, he says that he finds its culture and history fascinating.

“I think it’s because Vikings are such a weird topic for people. They’re not familiar with it. They’re kind of like, ‘How much can there be?’”

Hegg continues: “There are so many aspects of Viking culture that are really fascinating. Just the fact that they actually travelled to North America 400 years before Christopher Columbus ever did – that’s a big thing.

“We haven’t even touched that aspect of it yet, which is one idea that I have – maybe in the future we’ll do something about Leif Erikson.

“It’s such a fascinating thing how they actually settled and lived around them for 40 years.”

What happens in the studio with Amon Amarth?