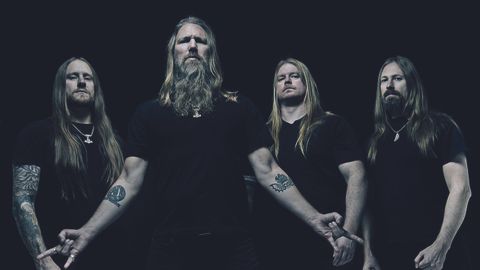 Amon Amarth’s highly successful take on Viking-obsessed death metal with a pop-tastic ear for melodic riffs is honed to a sharp spearpoint by now, so it was highly unlikely that Jomsviking was ever going to be shit – and it isn’t.

There are plenty of the grin-inducing moments that have rightly earned them wide popularity, right from when First Kill hares out the traps, and continuing through the anthemic, absolutely fantastic not-quite-title track The Way Of Vikings. These two, along with the crunching, rapid-fire attack of On A Sea Of Blood, and the singalong-ready Raise Your Horns, make sure Jomsviking has the things you most want from an Amon Amarth album: songs you can immediately remember that are going to sound massive live.

By and large, this is killer business as usual from Amon Amarth. There’s the odd misstep like One Thousand Burning Arrows, which is a bit more serious/plodding than really suits the Swedes.

Also, Andy Sneap’s usually excellent production hasn’t quite got the lead guitar parts right, with the melody prominent but the tone lacking grit, which saps the parts of a little of their power. It’s slightly less consistent than Amon Amarth’s best, but mostly, Jomsviking slays.