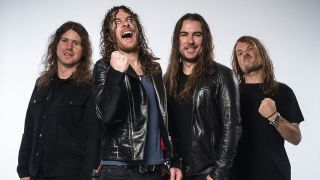 Since forming in Warrnambool, Australia, in 2003, Airbourne have dedicated their lives to flying the flag for rock ‘n’ roll. And after losing our fearless leader, the dearly departed Lemmy Kilmister, at the end of last year, you could argue they’re the next in line to carry the torch for rampant, riff-driven entertainment.

Their upcoming fourth album Breakin’ Outta Hell is out September 23, via Spinefarm. But what is it all about?

“Ultimately, we just wanted to make a great drinking record,” says frontman Joel O’Keeffe. “That’s what this album is about: no ballads, no bullshit, just hard rocking songs that help you break out of hell.”

So what are you waiting for? It’s time to crack open a cold beer and turn your stereos all the way up to eleven, as brothers Joel and Ryan reveal all about the new Airbourne album…

Joel: “We wanted to come out swinging with a good, hard, fast track. Breakin’ Outt Hell is very us, and the lyrical content is what we wanted to come out saying straight away. It speaks to a lot of people who love our band: ‘I’m a crazy mother fucker and I just don’t care.’ It’s a full throttle song and it’s what we needed to launch with. And it’s already been getting circle pits going at the shows, so we know it’s going over well live.”

Ryan: “Whenever we start playing a new song, it’s one of the times that I like to look up from the kit and focus on some of the crowd’s reactions. One guy really stuck in my mind at Ramblin’ Man festival; he had a bald head and sunglasses on. He was there with his mates, smiling the whole time and enjoying himself, but when we started playing Breakin’ Outt Hell he turned from a nice guy smiling to a tough guy biting his bottom lip, and it was the riff that set him off. He knew what was coming and he was ready to fucking go.”

Joel: “Rivalry comes from a lot of different places. Small live venues are being closed down left, right and centre to make way for high-rise apartments. It’s the rockers versus the big man theme. But it also comes from sports team rivalries and the rivalries of war, or the kid with long hair that’s being picked on by all the jocks in school, and the rivalry there. It’s also the law of the jungle; there’s a rivalry between the lion and the guy with the gun. I fucking hate the guy with the gun. I’m all about sticking up for the lion.”

Ryan: “It’s definitely about the kid who loves rock ‘n’ roll and feels out of place in the world. It’s about sticking up for what you believe in and fighting for it. It’s an anthem for the underdog that recognises that it’s a rivalry and he’s saying, ‘It’s between you and me motherfucker, and I’m gonna go all the way.’

Joel: “Get Back Up is for guys like you, [in 2013 this writer broke his back and spent three months in hospital recovering, but that’s a story for another day]. You fell on a train track and you were fucking busted to hell. You went to the hospital and they said, ‘You’re fine, go home.’ But you weren’t fine; you were fucked. Then you had to go back and stay in hospital for three months. You were at the end of everything. But what did you do? You fucking got back up. This song is for guys like you that go through something so tragic that could crush any man, but you just have a power and a fire inside you that says, ‘No matter how many times you knock me down I’m gonna keep getting back up.’ That’s what that song is about.”

Ryan: “For anybody else out there, through all your troubles, this is a song for you too. Everyone in life at some stage gets knocked down, but at that lowest place is where you really find yourself. Once you do find yourself you brush yourself off and you get back up.”

It’s Never Too Loud For Me

Joel: “This song goes back to the small live venues being shut down by the big high-rise apartment and the local government law. It’s about standing up against corporate bullshit and saying, ‘You know what? It might be too loud for you, but it’s not too loud for me. We chose to come to these places and we were here first. These clubs are stepping stones for young bands where they learn their craft, and you just want to take that away? Fuck you. Why don’t you just put double-glazed windows on your shitty fucking high-rise apartment and spend a few extra grand on that so the future of rock ‘n’ roll has a place to go to school.”

Ryan: “Thin The Blood was written while sitting in the pub drinking pints of beer. That was where the main lyric came from. One of us said ‘thin the blood,’ and we just looked at each other and the phrase went straight into notes on the iPhone. If you listen to the song in the car, I hope you’re a good driver because you’re potentially going to crash. Or at least get a fine. The song also has a bit of an old school British punk feel to it, but it’s still very rock ‘n’ roll; we definitely stepped up the high energy and aggression that this band is known for on this one. It’s one of my favourite tracks on the album.”

Joel: “We can obviously relate to the title. As far as the lyrics go, the first verse is about getting to the end of your working week and getting on the piss. That’s the Friday night. Then the second verse is the Saturday morning, being hungover as hell and feeling like shit. It was written from experience. I actually did the vocals for the song hungover as fuck. I had a big night the night before and I didn’t think I’d have to sing that day because we’d planned to go see Iron Maiden live. But Bob made me sing the motherfucker, and like it says in the song I got my second wind and we went charging off to see Iron Maiden that night. This one’s going to be killer live.”

I’m Going To Hell For This

Joel: “This song is a metaphor for something that you know is bad, but you fucking love it and you do it anyway, and deal with the consequences later. That’s pretty much the moral of this song. It’s got a great groove too, and it’s going to be another good one to play live.”

Joel: “This is one of those single entendre songs. There aren’t a lot of bands that could get away with shit like this, but our fans and us are all together in it and you have to put your money where your mouth is sometimes. We know that when we crank this tune up during the back end of our set when everyone’s good and pissed and having a great time, they’ll all sing along.”

Ryan: “The funny thing about Down On You is it’s that self-explanatory; you don’t have to do anything except read the title.”

Joel: “This song is a double entendre for ‘never been fucked like this.’ It’s like when you wake up the next day and you go, ‘Jesus Christ! My backbone’s out and I can’t walk. Last night was fucking great!’ It’s one to play in the bedroom, nice and loud.”

When I Drink I Go Crazy

Ryan: “Whilst we were making this record, Joel and I would spend a lot of time late night drinking together. We can both relate to the title of this song through our lifestyles: one of the lines in the song talks about ‘directing traffic like a ninja’ and that was something I literally spotted Joel doing in the middle of the road after a big night out.”

Joel: “I don’t remember that happening. I walked into Ryan’s room the next day and said, ‘Ryan, how did we get home last night? What the hell happened?’ All the lyrics on this record come from either lived experiences or influences from people that we know. When I Drink I Go Crazy is like a bio for the band and our fans.”

Joel: “Our producer Bob said to us, ‘Every band that I produce gets a gimme. This is your gimme. Go hell for leather; I don’t give a fuck what you write.’ This is that song and in Airbourne it’s all or nothing, so you can’t have a track called Do Me Like You Do Yourself without the lyrical content. There’s lines like ‘The gates of heaven were open wide, would it be a sin if I came inside?’ But the best part is the pre-chorus: ‘Your hands are moving with a mind of their own, you’re having the best sex but you’re all alone.’ Then the last line goes, ‘Do me before I do myself.’ Ha ha! It’s a real ode to masturbation.”

Joel: “This song is for Lemmy. He helped us out so much, from appearing in the Runnin’ Wild video to putting us on countless tours with Motörhead. We played a legendary tour with Motörhead and Rose Tattoo in Australia, too. He was so gracious and such a wonderful guy, and we’d always see him overseas at festivals. We’re used to going on tour, doing our set, then an hour later hearing the immortal words, ‘We’re Motörhead and we play rock ‘n’ roll.’ Then we’d hear the thunder of Lemmy’s bass and the whole thing erupt. That’s not there anymore. They’re still here in our hearts and they always will be, but we don’t get to see Lemmy anymore and that’s left such a gaping hole. So Ryan and I started talking and we decided to write a song for Lemmy. We didn’t want to make it obvious but this is our salute to Lemmy. He was the general of rock ‘n’ roll. He did it from day one to the finish, and that’s what happens when you’re a fan of rock ‘n’ roll; everyone is in it from day one until the end and we’re all in it together. That’s why I sing, ‘It’s all for one, it’s one for all, it’s all for rock ‘n’ roll.’ That’s what the song is about. It’s for all the rock ‘n’ roll heroes that we’ve lost. That’s why we finished the record with it. It’s all for rock ‘n’ roll.”

Breakin’ Outta Hell is out September 23, via Spinefarm.