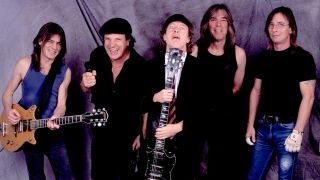 Former AC/DC drummer Phil Rudd has reflected on the meltdown that led to him being replaced in the band, saying he shot himself in the foot.

Rudd was dismissed from the band last year after being charged with threatening to kill and drugs possession, and wound up serving eight months of home detention in New Zealand. AC/DC replaced him with returning member Chris Slade.

And asked whether he was disappointed not to get the chance to perform songs from the group’s latest album Rock Or Bust live, Rudd tells Eon Music: “I was very disappointed, but it’s called ‘shooting yourself in the foot’, young man.

“I fuckin’ did it, mate, and I did it well. I’m sort of a little bit restricted on travelling around like I’m used to, but I’m coping with that, and I’m not done yet! “

Since Rudd’s departure, frontman Brian Johnson and bassist Cliff Williams have left the band, with mainman Malcolm Young having bowed out previously. Rudd recently said he was optimistic that guitarist Angus Young will return and that he wants to take part.

Now he reveals that he has spoken to the band and Johnson recently. He says: “I’ve had contact with the guys and the crew. I’ve heard from Brian. I spoke to Brian a couple of days ago. We were talking about cars and how fuckin’ useless he is – how much quicker I am than him! He’s doing all right.”

Rudd is concentrating on the re-release of solo album Head Job, combined with a tour of Europe and the UK next year.