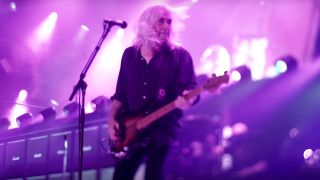 AC/DC Cliff Williams has thanked fans for their support over the past 39 years as he retires from the band.

He played his final show with the Aussie giants last night (September 20) following his announcement in July that he’d stop working when the Rock Or Bust world tour ended.

But he’s reported that his decision isn’t connected to the departures of Malcolm Young, Phil Rudd and Brian Johnson over the past two years.

Williams, 66, says in the video below: “It’s been a hell of a tour. It’s been great. The fans’ support has been brilliant.

“It’s time for me to step out. Not because we’ve lost Mal, Phil or Brian. Everything changes. When Bon died, it changed then.

“It’s just, I’m ready to get off the road and do what I do in between tours. I know what I’m going to do. It’s just my time.

“I need family time now, just chill out and not do this. I’m all good – I couldn’t have asked for anything more.”

Sole remaining original member Angus Young said last month that he felt “obligated” to keep the band going, adding: “Malcolm was always one to battle through. He would look at me in times of crisis and go, ‘We’ll just go in and do some work. We’ll sit and write some songs.’”