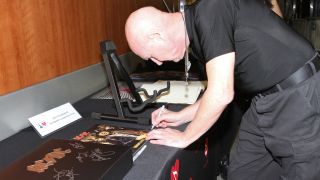 Former AC/DC drummer Chris Slade has confirmed that he’s filling in for Phil Rudd during the band’s performance at tomorrow night’s Grammy Award ceremony in Los Angeles, and has been pictured signing AC/DC memorabilia at a pre-event charity bash.

Also pictured at the event were the band’s Brian Johnson and Cliff Williams, further fuelling speculation that Slade was to fill the drum stool vacancy created by Rudd’s ongoing legal battles. Rumours began to circulate earlier this week that the Welsh drummer had been asked to return, and he’s now released a statement.

“This is an amazing opportunity for me,” says Slade. “After all, most people don’t ever get to play with their favourite band once, let alone TWICE!

“I would like to thank everyone for the overwhelming support I have been shown personally, on the Facebook page and other social media. Not one comment has gone unread and it has been very humbling. Thanks so much.”

Slade originally joined AC/DC in 1989 and played on The Razors Edge before Phil Rudd was brought back in 1994.

While cameras were also present at the band’s Grammy show rehearsal (see gallery below), no shots have yet emerged of Slade onstage.

Phil Rudd has said that he wants to play on AC/DC’s forthcoming tour dates, but received a setback this week when his trial for threatening to kill and drugs possession was delayed.