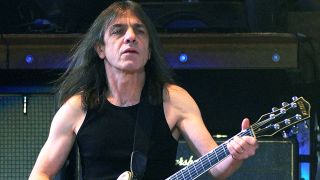 AC/DC had to contain their reactions while Malcolm Young began to suffer with dementia during their Black Ice world tour, says frontman Brian Johnson.

The band’s mainman was forced to retire earlier this year as his condition deteriorated. Latest album Rock Or Bust, released on Monday, is their first without him.

Angus Young recently revealed that his brother had begun experiencing problems before they decided to embark on the three-year tour in 2008, which became the fourth biggest-grossing of all time. At times he had to relearn his own riffs.

Now Johnson tells the Guardian: “It was tough. But you couldn’t say anything or do anything because it would have been like giving pity. You had to treat it like a normal day – so we did.”

Johnson adds: “God knows what went through his mind when he wasn’t that well. He’d go on stage and… ‘Oh shit!’ Can you imagine knowing you’re not sure? You know where you are, but your mind’s playing tricks. He was brilliant.

Angus says: “Sometimes you’d look and he’d be there – you’d have a really great day and he’d be Malcolm again. Other times his mind was going. But he still held it together. Some nights he played and you’d think, ‘Does he know where he is?’ But he got through.”

Malcolm is receiving residential treatment in Australia. His brother reports: “Every now and then he’s still the Malcolm I know.”

AC/DC will tour next year with nephew Stevie Young in the mainman’s place. The status of drummer Phil Rudd remains in doubt as he faces charges of threatening to kill and possession of drugs.

Meanwhile, the engineer behind Rock Or Bust has revealed how the band approached replacing Malcolm with Stevie in the studio. Mike Fraser tells Straight.com: “You go, ‘Well, I wonder what Mal would have done?’ But we had to shelve that and just do the similar thing. That’s a big part of their sound, with the two different guitars – Angus’s style on one side and Mal’s style on the other side. Stevie did a top-notch job.”