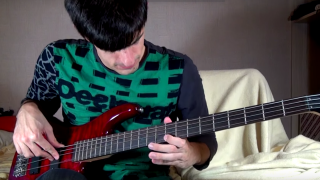 Davie504 – his YouTube name, he’s not a robot or anything – is an Italian guy living in Taiwan. He looks like he should be on The Big Bang Theory (“Never knew Spock could shred﻿” says one commenter) and certainly knows his way around a bass guitar.

On his YouTube channel, he’s played a solo with no strings, used a bass fish to play a bass guitar and played along with Apple’s Siri attempt at beatboxing. He’s even recorded cover versions of music from Toy Story, The Simpsons and even the time-sapping Tetris game. We think he never leaves his bass alone.

His latest challenge came from a chap called Roger: “Very cool but what can you play with a bass tuned ACDC?”

A standard bass tuning is EADG. As the bottom string has been downtuned to A, Davie’s bass now sounds like a bag of missiles being lobbed on a concrete castle lined with death and fist-gnawing anxiety. Or Sunn O))).

Check out Davie’s funk-tinged covers of AC/DC classics Back In Black and T.N.T in the video below… then prepare marvel your face off at the tricky riff from Thunderstruck. Please swat any thoughts of Muse from your mind.

AC/DC Quiz: How well do you know Back In Black?