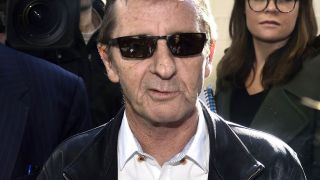 Estranged AC/DC drummer Phil Rudd says he’s not given up hope of one day rejoining the band.

The sticksman recently completed an eight-month home arrest sentence after being found guilty of drugs possession and making death threats. That led AC/DC to replace him with Chris Slade for their Rock Or Bust world tour.

But with Malcolm Young retired due to dementia, and frontman Brian Johnson’s hearing issues resulting in him being replaced by Axl Rose, Rudd is unsure of what the future holds. And while he can’t travel to the US because of his conviction, he says he can still play shows in Europe.

He tells the The Bay Of Plenty Times: “It is up to Angus Young, what he wants to do. I am limited to where I can go.

“I’ve never felt better as a drummer or a person. I am not saying I never hope of ever playing with AC/DC again but, then again, is it even AC/DC any more? No Bon’s beautiful voice. No Malcolm. No Brian.”

Rudd’s planning a return to Europe this summer to play shows in support of his solo album Head Job, which was released in 2014. “I am going to France and Belgium to play some gigs,” he says. “Small venues – it might even be a pub. It is going to be low key.

“I can tell you that I am as positive as I can be now that I have given up the crazy shit, and I don’t want to go back to it.”

AC/DC’s tour dates with Rose continue on May 16, when they play Werchter Site in Belgium. They’re the cover stars of the current edition of Classic Rock, on sale now in print, digital and via TeamRock+.