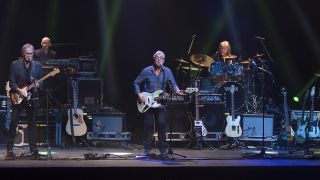 10cc have announced that they’ll head out on tour across the UK later this year.

Graham Gouldman and co. will play a total of 25 dates – kicking off at Carlisle’s Sand Centre on October 8 and wrapping up with a performance at Salisbury City Hall on November 8.

A statement reads: “Since the most recent live version of the band has been established, 10cc have toured worldwide, including Australia, Japan, Iceland, New Zealand, across the UK and Europe.

“It has been an eventful few years for Graham Gouldman. Not only is 10cc enjoying increasing success around the world, but recognition of his solo achievements has grown too.

“Being invited by Ringo Starr to join his All Starr Band for tours of Europe in June 2018 and the USA that September, during which the band played three 10cc songs, elevated his profile yet further.

“2020 is set to be another sell out year as the band take their inspirational live show back on the road, performing their timeless hits and more, and always with a surprise or two.”

The tour coincides with the 45th anniversary of the release of their hit single I’m Not In Love, which reached the top five in 10 countries and helped their 1975 album The Original Soundtrack climb to the top of the charts in the US.

Tickets will go on sale from 9am GMT this coming Friday (February 7).

A fully authorised 10cc biography titled 10cc: The Worst Band In The World will be released through Rocket 88 on February 12.

10cc: The Worst Band In The World
This fully authorised biography of 10cc has been written by Liam Newton who has been writing and researching the book for three decades. It features a foreword by Kevin Godley.View Deal