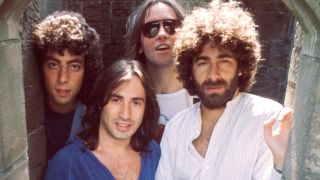 A fully authorised 10cc biography is to be published early next year.

Titled 10cc: The Worst Band In The World, it has been written by Liam Newton and will be released through Rocket 88 on February 12 in hardcover.

The 528-page book is said to have been “a true labour of love” for Newton, who has been writing and researching the biography over the course of the last 30 years.

The synopsis reads: “Over the past three decades Liam has interviewed founder members, contributors, former managers, producers, collaborators and artists for this work.

“He’s read every interview, book and article about 10cc, bought every recording of not just 10cc but their various offshoots and previous incarnations, too. But this isn’t a dry and dusty research document, it’s a living, laughing, lively telling of a precious piece of British pop music history.”

Former 10cc member Kevin Godley, who's penned the book’s foreword, says: “Very thoroughly researched and quite a story. Lots of stuff in there I didn’t actually know.”

10cc’s Graham Gouldman adds: “It’s only after reading this book that I realised how influential 10cc were.”

10cc: The Worst Band In The World is now available to pre-order on the book's official website.

10cc: The Worst Band In The World
This fully authorised biography of 10cc has been written by Liam Newton who has been writing and researching the book for three decades. It features a foreword by Kevin Godley.View Deal