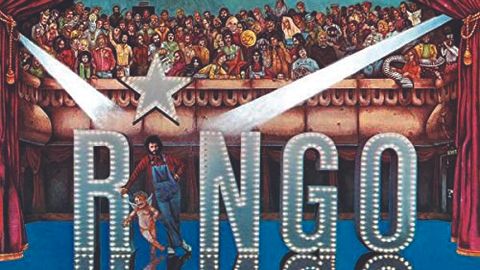 There was a time when everybody liked Ringo. The record-buying public gladly guzzled on his dour vocal flatness. In ‘73, the year of Ringo, America granted him a brace of No.1 singles while John Lennon’s Mind Games stalled at No.18.

His musical peers queued to appear on his records (all four Beatles are on Ringo, as are The Band, Marc Bolan, Harry Nilsson, Martha Reeves… how long have you got?). All involved seemed equally delighted to donate perfectly servicable compositions: Lennon’s autobiographical I’m The Greatest (a song its composer recognised he probably wouldn’t get away with personally, but that Ringo’s perceived humility would render palatable), McCartney’s Six O’Clock, a saccharine ballad that might have served Macca well, given enough Wings, and Harrison’s Band-enhanced country-folk belter Sunshine Life For Me (Sail Away Raymond).

Elsewhere, T.Rextasy-peaking Bolan puts a little extra spring into the swagger of Randy Newman’s Have You Seen My Baby. And then there’s the two US chart-toppers: Photograph (Ringo’s creditable co-write with Harrison) and an apparently irresistible take on Johnny Burnette’s You’re Sixteen which, while catnip to the airwaves in its day, with its weapons-grade hooks courtesy of Mary Poppins tunesmiths the Sherman brothers and contemporaneously en vogue 50s nostalgia, now only raises eyebrows for the suspect nature of its lyric.

That said, if you can shake the image of today’s no-autographs, V-flicking Ringo to remember when he was a national treasure, a game-for-anything John Noakes of the drums, maybe you’ll suspend your postmillennial sophistication just enough for Ringo’s unpretentious time capsule to rework its peculiar magic.