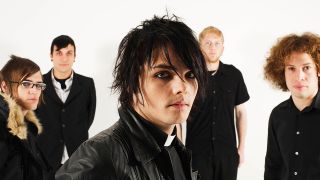 Where were you when you heard about the My Chemical Romance reunion? I was half-listening to an important business call, furiously refreshing Twitter following a tip-off earlier in the day. MCR fans had suffered enough false starts and rumours, so I tried not to get my hopes up.

But this time, it seemed like Joe Jonas was actually right, and after dropping a few cryptic Instagram stories, the band announced an LA show for December. Fans everywhere started to offer up their organs for a $150 (!) ticket and a flight, and after even more shows were announced, those whose inner emo had been lying dormant started to shout it from the rooftops: emo is back.

Of course, those of us who are still committed know that it’s already been back. After its brief, tumultuous flirtation with mainstream status in the mid-00s, emo arguably did retreat back to the shadows. It didn’t disappear entirely, but its remaining fans were the diehards. Ageing male purists will dispute whether or not the scene that’s returning is even real emo, but even if it isn’t, it’s clearly the only iteration that means enough to enough people to enjoy a meaningful comeback.

It’s been a few years since mid-00s emo started to make a serious return into the public consciousness. From First To Last reunited at Emo Nite in 2017. Paramore released Hard Times that same year. Lil Peep reinvented the genre, combining sad lyrics with rap. New bands, like the recently reformed Creeper, are experimenting with the sound and look for a new era.

This year alone, Fall Out Boy announced the Hella Mega Tour with Weezer and Green Day, Funeral For a Friend played shows, and Motion City Soundtrack announced a reunion for next year. That’s just the tip of the iceberg: every day, emo bands are putting on anniversary shows, bringing out new albums, and headlining festivals.

Regardless of where you stand on what "real" emo is, the chances are if it had guitars and pained lyrics and you were listening to it in 2006, it’s back with a vengeance.

But why? Cynics will say that the 2010s emo revival is solely about nostalgia, and sure, that’s part of it. When the world is so terrifying, so out of control and so miserable, why wouldn’t you want the warm embrace of the things that made you happy 10, 15 years ago? They may also say that this comeback is solely finance and clout-motivated. Again, if you were in a popular band 10 or more years ago, it makes business sense to jump on the comeback and make some money.

It’s a respectable decision. But it isn’t that simple.

In our adolescence and young adulthood, we were sold a lie that we would grow out of the things we genuinely enjoyed. I believed it, too, attempting to “grow up” in 2008, aged 15, and discover other music. But at 18, in a club that strictly played mid-00s emo and pop punk, I realised how wrong I was. The things that we enjoy, the things that form us, will always give us something back. With emo, it goes deeper than nostalgia. That night saw me truly enjoying music for the first time in years and kick-started my own personal emo revival.

Many would (and do) argue that emo never went anywhere, that it just disappeared from the mainstream or public consciousness, going back to being actually alternative. Maybe that’s true, but it’s one thing enjoying the music you used to love quietly at home or in your car or at low-key shows. It’s another thing entirely to experience a complete mainstream takeover by the culture.

I never thought I would see a world where emo was once again on general news websites and discussed by people outside of the culture. Last week, Saturday Night Live aired a sketch about Paramore starring Kristen Stewart. It felt wildly anachronistic, but made perfect sense: if something is happening right now, SNL will be making fun of it. While mid-00s emo artists have performed on SNL in previous years, the show mocking Paramore in 2019 perfectly encapsulates just how at the forefront of public consciousness emo is right now.

In the first place, maybe emo touched us because we were going through a tumultuous adolescence. That’s why it still resonates with teenagers today, because the music of the 00s speaks directly to their difficult growth. But as artists come back and evolve, it isn’t enough to attach it to nostalgia. We still love emo, long after our own teenage years, because it still touches us. As our favourite bands have aged, so have we – as they’ve experienced grief and divorce and ageing, so have we. Contrary to what we may believe, there is no time limit on wanting to feel understood.

Emo is about community; it’s about finding friends in people who also struggle with their mental health or their sexuality. It’s about going to shows, going to emo nights, sharing in the togetherness that the scene can bring. If there’s a mainstream revival, that means even more people to share the culture with – in 2019, we have people to do that with all over the world. For many of us, listening to emo and making friends through the community helped to form who we are. It was a support system, guiding us through difficult years.

Arguably, it’s the best time to be emo since the actual mid-00s. Back then, the culture was sidelined and derided by both mainstream media and, if I recall correctly, basically all of my peers. We know better now, and with the rose-tinted glasses of nostalgia, we can admit that emo is pretty good. If you’re a teenager, you have all of the bands you’ve never gotten to see reforming before your very eyes. And if you’re an adult, well, you both have the money to indulge your fandom and don’t have to go to school to get bullied. It’s perfect.

Plus, fucking hell, we live in hard times. With the planet burning down, politics in a complete state and the economy in perpetual crisis, why wouldn’t we want to seek solace and community in something we enjoy? We can’t afford homes or stability, but we can maybe just about afford the exorbitant prices for comeback shows and merch.

The catharsis that can be found through emo continues to bring many of us comfort, reminding us of what we loved about the past while guiding us through the present. I, too, wrongly believed that emo was something I should have left in my teen years. But hugging my friends backstage at a Creeper show on Friday, anxiously babbling about the MCR reunion, I realised: for better or for worse, I will always be a dirty emo. I’m just so glad everyone is on board to share this time together.