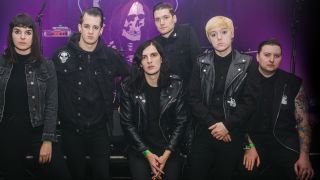 On a dark, cold, wet January evening in north London, the mourners are gathered. As they enter the building where tonight’s funeral takes place, a sombre man in a suit hands them an order of service and offers his commiserations for their loss. He is standing next to a wreath, as an organ plays quietly in the background. But where there should be a casket and an altar, there is a drum kit and a set of amps on a stage. This is no ordinary memorial – it’s another uniquely brilliant event in the quickly evolving cult of Creeper.

“We were told that we were going to have to do this gig where we’d invite a load of industry people,” Creeper frontman Will Gould explains to us earlier, sitting in the band’s darkened dressing room beneath the Boston Music Room. His face screws up in discomfort at the thought of an industry showcase gig. “I really didn’t want to do it. We kept putting it off. Then we were told that we could do a show for fans who bought the pre-order of the album, which I was more comfortable with. We realised that it might be the last time we play some of these songs from our EPs. So we were like, ‘Let’s kill them off!’ and the idea of having a funeral for them was something that we thought would be really memorable. We’ve blown the budget, but we know that this won’t just be another gig for the people that attend tonight. It’ll be a signpost moment in our career.”

Watching Will’s eyes light up, and hearing the breathlessness in his voice as he talks about his plans for his band, it’s obvious not only that there is genuine excitement in the Creeper camp at the moment, but that we are witnessing the growth of an act brimming with a rare sense of grandiosity and invention. In fact, even the promotional campaign for the build-up to debut album Eternity, In Your Arms included phone numbers to call, missing persons posters, podcasts of spirit hunters, videos of spirit sightings, and so much more (see A Series Of Unfortunate Events, page 48). It marks them out as far more than just another punk band.

“We miss the way that artists used to tie everything into their art,” Will shrugs when we ask what inspired them to create an image so striking and a story so labyrinthine from their first release. “David Bowie and Marilyn Manson didn’t just make albums, they made whole worlds to explore. That’s not what people might expect from a punk band, and we’re definitely still part of punk rock, but it was just a way to try and recreate the depth of excitement we felt at the records we grew up loving.”

If Manson and Bowie seem like lofty role models for a modest group of South Coast punks, then you obviously haven’t seen the adoration that this attention to detail has brought to Creeper. As we wander around the congregation upstairs, just before the band take to the stage, it is striking to see how many of them are branded with Creeper’s black-and-purple Callous Heart logo, whether through tattoos or back patches. An unofficial Facebook group named Creeper Cult has almost 2,000 members, and there are daily blogs and Tumblr posts attempting to unravel the band’s lyrics. This is a dedication that most established artists would kill for… and all for a band only just releasing their first album.

“We’ve been really blessed by our fans,” says Will, with genuine humility in his voice. “It’s absolutely become something that we never could have imagined. Their dedication to us is so humbling, and it has given us the strength to really indulge ourselves in these grand ideas, because we know that they trust us implicitly. But I do think it can be dangerous, too, because we have to make the art that we want to make. If we start to make music for the people that follow us, if we start to second guess ourselves, then that’s when the music starts to suffer. If we aren’t following our collective vision then it would be dishonest and, frankly, crap.”

Will even has words of warning for fans who believe they have a handle on what Creeper are. “The thing with us having such a strong image is that when we change it…” Will pauses for a second and smiles as a million ideas flash through his head “… just imagine how fun that will be! To kill off the Callous Heart, to bury all of these characters we’ve created. We could come back with an album and image like Kraftwerk. I wouldn’t rule that out. Honestly, I can’t wait to do that.”

But that is for the future. The present is Eternity, In Your Arms, an album that is stunningly grown up and perfectly realised for a band who are still in their infancy. From the opening noir punk of Black Rain, the record recalls everyone from AFI to Meatloaf, Alison Krauss to Queen, before ending on I Choose To Live, a song that could have been penned by Andrew Lloyd Webber to close a big-budget Broadway musical. For all of the magic surrounding Creeper, none of it would have meant anything if the music hadn’t have added up. But Eternity, In Your Arms might be the most spectacular achievement of all.“We wanted the album to be a journey,” Will tells us. “And that level of diversity was something we struggled with. You know, how do we go from a punk rock song like Room 309 into a… well, a country song like Crickets? It all had to be meticulously planned to pull it off. Trust me, everything we do is agonised over.”

Later that night, Creeper wander onstage to play a set to a couple of hundred lucky obsessives, and to bury their songs Novena, The Secret Society and Into The Black. It’s here you see how much this band have connected with their audience. When Will dedicates Misery to a friend of the band who recently took her life, and tells us the song was played at her funeral, the entire room sings every word as loud as any stadium crowd, while the band stand there dumbstruck. For all of tonight’s theatre, this is a horribly real nod to an avoidable loss of life.

“That was an incredibly sad and difficult moment,” says Will after the gig. “We used to know this girl back in Southampton who was a big part of our scene. We kind of lost contact with her over the years, then we heard this news that she had taken her own life.”

He sighs, keen to stress that suicide is never, ever the answer. There is always someone to turn to, whether it’s friends and family, or a doctor or a helpline. Not only is it a tragic waste of life, the impact on those left behind is completely devastating.

“I just wish,” he begins, clearly struggling to find the words, “that she could have heard the album. Because side one ends with Misery. And that song is meant to close the first chapter on, I guess, a downer. You know, ‘Misery never goes out of style’. But then the way we end the album is on I Choose To Live, which is obviously a very different message. I wish she could have heard that.”

Vital words from one of today’s most vital bands. And they’re only getting started.

Eternity, In Your Arms is out on March 24 via Roadrunner

A series of unfortunate events

Your guide to the James Scythe saga so far…

Eternity, In Your Arms has had one of the most unique promotional campaigns in memory. Here is how we reached this point

The band release their third EP, The Stranger. Pre-orders come with a shirt bearing the words ‘South Coast Coroners’ and a phone number. The number, when called, plays a quick lullaby. After hanging up, the caller receives a text asking ‘Where is James Scythe?’

The night after the band play Leeds Festival, the official and individual social media outlets of the band are suspended. At first the band claim they are being hacked… before everything disappears.

Fans receive a new text from the original number with a link to a website, www.whereisjamesscythe.co.uk. It’s dedicated to the disappearance of James Scythe, a local supernatural investigator. The site included a podcast about paranormal happenings in Southampton.

The band’s website and social media outlets all return. They include missing posters for each member of the band.

The number to the South Coast Coroners no longer plays the song. Instead, a voice is heard telling you that “On October 2nd 2016, we’ll die holding hands.”

A Facebook page is set up for Strange Southampton, one of the collectives mentioned on the James Scythe website.

Strange Southampton posts a request for people to get in touch regarding “Mysterious happenings”. When messaged, the site sends a series of pictures of local buildings. Eventually you are sent a video of a sighting of what looks like The Stranger from the front cover of the band’s EP.

Strange Southampton sends through an audio message from the same voice that you can hear on the South Coast Coroners line, saying, ‘On the day of my second track, the rain will change from blue to black.’ Creeper release the single Black Rain on Valentine’s Day… it is track two on the album.

Creeper's Will Gould tells us why he loves AFI