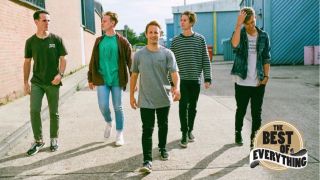 Eastbourne’s ROAM have been pedalling their own brand of hook-laden pop punk since they first burst on to the scene in 2012, so it’s safe to say they’ve come to know a thing or two about the genre in that time. With that in mind, and to mark the release of their second album Great Heights And Nosedives, due next month, we asked them to join us to for a comprehensive run down of the best pop punk albums of all time as they see them.

Check out their choices, along with the video for new single Playing Fiction, below.

“It’s very hard to pick one album for this list by Blink, as most of their albums should be on here. For me, Take Off Your Pants And Jacket is one of the greatest pop punk albums ever written. It has mainstream bangers as well as offensive joke songs. It perfectly showcases what everybody loves about them. What more could you want from a pop punk album?”

“This album was pretty much the soundtrack to my teenage years… and all of the years that have followed. I have never grown bored of this album and it’s still played in my car very regularly. This album makes me want to grow out my fringe and whack on some tight-fitting T-shirts. Seriously though, Fall Out Boy were one of the first bands I ever saw live and it definitely fuelled my love for pop punk.”

“This album is one of the greatest albums in the pop rock/punk genre to date. Paramore truly broke the mainstream with this one, proving them to be an unstoppable force in the music world. We have loved everything Paramore have ever released – they have an awesome way of doing whatever they want to do whilst keeping everybody interested – but RIOT! will forever hold the number one spot for us.”

“I think out of the five of us, this was the first album we ever bought with our own money for maybe three of us. You can’t even go to a club in 2017 without them playing In Too Deep or Fat Lip at some point in the night. That truly shows how influential this album has been. Sum 41 continue to be a huge part of the genre and show no signs of slowing down.”

“Do I really need to write a description of this album? Seriously though, love it or hate it, you cannot deny that this is one of the must successful pop punk albums of all time. Seemingly from out of nowhere, Green Day took over the world, absolutely dominating the mainstream radios and selling out stadiums all over the world. Even your parents love this album.”

Good Charlotte - The Young And The Hopeless (2002)

“I remember first seeing the video for Lifestyles Of The Rich And Famous and wishing I could have hair like Benji Madden. That shit was cool. The Young And The Hopeless is a really fun album with tons of singalong songs, everybody knows the words to Girls And Boys and The Anthem.”

“The only copy I owned of this album was a burned copy my sister gave me of her CD when I was, like, eight. Sorry. I still have it somewhere, and I still love it the same as when I first heard it. Jimmy Eat world opened up the first show I ever went to, and unfortunately I haven’t had the chance to seem them since then. Though some see lead single The Middle as an overplayed song, there is a reason for that – it’s a banger, much like the rest of the album.”

“I must admit I discovered this album way later than everybody else, I first heard it maybe two years ago, but it is high up on my list of best pop punk albums of all time. The way singer Justin Pierre manages to tell the story of his addictions without creating a dark sounding album is incredible, if you haven’t heard this album, you need to. Right now.”

“Everybody has a favourite MCR album, for me its no contest – Three Cheers For Sweet Revenge opened me up to the world of emo in my teenage years, like it did with many other people. Though I haven’t given this a listening in a while, give me a few beers and put this album on full blast and no doubt you’ll receive a heartfelt rendition in my best Gerard Way impression.”

“It’s no secret that we as a band are influenced by Set Your Goals. We love this band and it’s tough to decide on an album that we enjoy the most, but I think Mutiny! is the perfect starting point for anyone wanting to get into them. Each song ties into the next and it’s a joy to listen to from start to finish. That being said, give This Will Be The Death Of Us a listen too, you won’t regret it.”

ROAM’s new album Great Heights And Nosedives will be released on 13th October via Hopeless Records. For more information, including full tour dates, you can head to their website. Check out the video for single Playing Fiction below:

Skate or die! How skate-punk took over the world