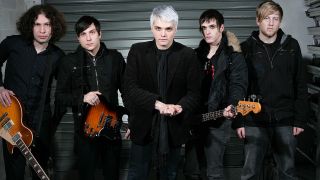 My Chemical Romance have announced they’ve reformed and will play a comeback show in Los Angeles next month.

The band’s social media channels lit up with the news that they’ll play at the Shrine Expo Hall in LA on December 20, with tickets going on sale later today (November 1) at 12noon PT.

The poster advertising the show came with the simple caption: “Like Phantoms Forever,” with frontman Gerard Way also sharing the news on Instagram.

My Chemical Romance split in 2013, with the band’s social media accounts causing a stir back in 2016 when the band uploaded a video teaser.

However, no reunion came despite widespread speculation, with the teaser a heads up for a 10th anniversary edition of The Black Parade which contained 11 previously unheard bonus tracks.

There’s no word if the reunion will extend beyond next month’s show, but one famous fan who is delighted in Linkin Park’s Mike Shinoda.

He says on Twitter: “Welcome back My Chemical Romance. Our shows with them were some of my favourite shows of all time. All my love to Gerard and the boys.”

Since the split in 2013, Way and guitarist Frank Iero continued high-profile solo careers, with Way going on to release the solo album Hesitant Alien in 2014 and followed that with a series of tracks including Baby You’re A Haunted House and Getting Down The Germs.

His comic book series The Umbrella Academy which was illustrated by Gabriel Bá was also transformed into a Netflix series and was broadcast back in February this year.

Frank Iero, meanwhile, formed Frnkiero And The Cellabration – releasing the album Stomachaches in 2014. The band then morphed into Frank Iero And The Patience, with their debut album Parachutes arriving in 2016.

In December last year, the name was changed again, this time to Frank Iero And The Future Violents.

Also, in news not related to the #fine single release: Welcome back @MCRofficial. Our shows with My Chemical Romance were some of my favorite shows of all time. All my love to Gerard and the boys ❤️October 31, 2019